Webb back to her best at Evian Masters

Karrie Webb recorded her best result for the season at the lucrative Evian Masters in France, finishing in a tie for 2nd with Stacy Lewis at 15-under-par 273 – two shots shy of winner Inbee Park. 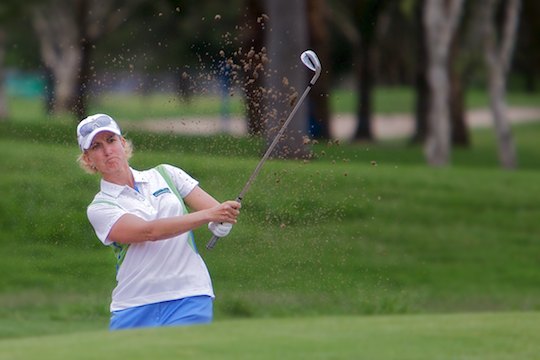 Webb had an eagle pitch from 30 yards on the final hole to try to force the issue and it was tracking toward the hole, with Webb running toward the green to follow its progress.

The Queenslander finished with a birdie but Park sealed her fate with a birdie of her own at 18 to win the Evian Masters, which in 2013 will become the LPGA’s fifth major.

The Korean’s victory is her second on the LPGA Tour and her first since claiming the 2008 U.S. Women’s Open title.

Webb’s tie for 2nd is her fourth top 10 finish of the season and best since a tie for 6th at the Wegmans LPGA Championship in June.