Seven-time major champion, Karrie Webb, has held off long-time foe, Annika Sorenstam, to capture her first title since 2014 at the Senior LPGA Championship in Kansas.

Following a bogey-free 66, Webb entered the final round of the 54-hole tournament with a two-shot lead before Sorenstam duly wiped that advantage from the leaderboard with an eagle at her very first hole. 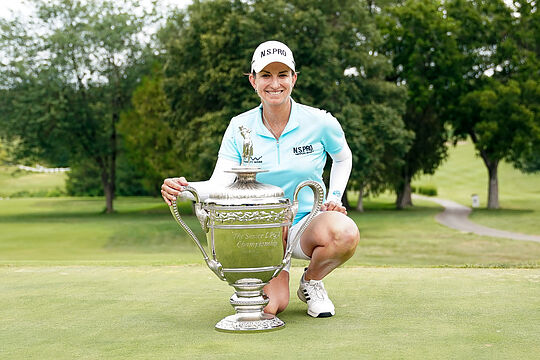 Both players traded birdies across the front nine but it was Webb who was able to put the foot down in the race back to the clubhouse with two birdies and an eagle at the par 5 14th on the back nine the difference in the end.

47-year-old Webb carded a 14-under total to claim her first trophy since winning the Women’s Australian Open and JTBC Founders Cup in early 2014.

“It’s been a long time since I’ve had to make putts down the stretch to win a golf tournament,” laughed Webb. “The mouth was getting dry and the little putts were seeming a little bit longer.”

“I’m not used to playing golf with adrenaline. It was hard to know how far I was hitting it, so it was a bit of a guessing game, but I think I did pretty good overall with it.”

Laura Diaz finished seven strokes behind Webb on 7-under with Becky Morgan, Michele Redman, Juli Inskter, and Lisa DePaulo sharing fourth on 4-under.

Webb was the lone Australian in the field this week.

Next up on the LPGA Seniors calendar is the Land O’Lakes Legends Classic in mid-August.