In what was a perfect warm up ahead of this week’s Women’s British Open at St Andrews, the world number seven shot a final round 65 at the Buckinghamshire Golf Club in England to come from three strokes behind the overnight leaders for a one shot victory over South African Ashleigh Simon. 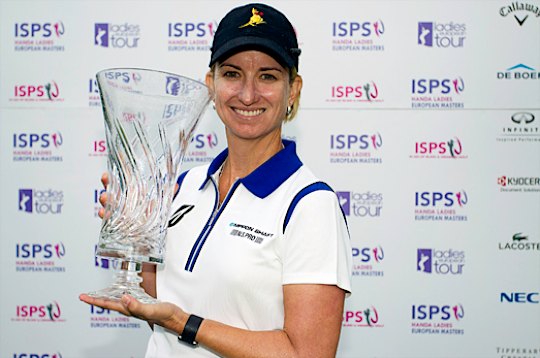 Webb completed the three rounds at 16-under-par and waited to see if Simon or Caroline Masson could birdie the last to tie and force a play-off.

However, having hit the hole with her second shot from a bunker, Masson ended with a bogey and Simon’s birdie putt was wide, handing the 38-year-old Australian the win and a cheque for €60,000.

Webb said: “I came over here to get some tournament rounds under my belt, get some confidence going, get into the time zone and British conditions. To win is just the icing on the cake.”

“I’m very happy with how I played this week and I got more and more confident on the course as the week went on.”

Simon took the positives from her close encounter with a third Ladies European Tour title, booking her place at St Andrews next week with the high finish.

“I can’t be disappointed, I played really well today,” Simon said. “Conditions were very tough and for Karrie to shoot 65, I take my hat off to her.”

“I don’t think I could have played any better. The pins were tucked on slopes today that you just couldn’t get to, so I’m very pleased and now I’m into the British Open and don’t have to qualify.”

Webb made inroads into the deficit from the outset with a birdie on the first hole, before tying the lead at 13-under after further birdies on the third, sixth and seventh holes.

She grabbed a two shot lead after going out in 30, with a simple eagle on the ninth hole and made a second eagle on the 14th after reaching the green in two and holing from thirty feet.

At the par-three 18th, Webb’s playing partner Christina Kim gave the crowd something to cheer about with a hole-in-one, before Webb calmly two-putted for her par. Kim shared fourth spot with Germany’s Sandra Gal.

Australian Rebecca Artis played well to finish at 8-under in a tie for 9th while Nikki Campbell was two shots further back tied for 12th.

A further six Australians made the cut in what was ultimately a successful tournament for the Aussie contingent.