Boo Weekley has ended a five-year wait to add another plaid jacket to his wardrobe.

Weekley rallied to win the Crowne Plaza Invitational at Colonial on Sunday after he carded a final-round, 4-under 66 to finish at 14 under. 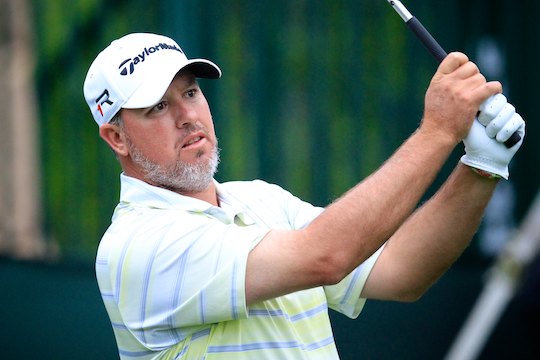 Weekley, who moved to sixth in the FedExCup standings, earned his third career PGA Tour success and the plaid jacket that goes to the Colonial champion.

Weekley also earned plaid-like jackets in his other two wins, both at the RBC Heritage in 2007 and ’08.

“I finally get my name up on that wall with Ben Hogan and some of the greats that have been here,” Weekley told CBS. “It’s awesome.”

Matt Kuchar (68) finished with a birdie on the 18th to finish second at 13 under, followed by two-time Crowne Plaza champion Zach Johnson (66) at 12 under.

Stuart Appleby and Marc Leishman finished the best of Aussies this week in equal 46th place with Appleby’s chances at a top 10 finish spoiled only by a third round 75.

Greg Chalmers was the only other Aussie to make it through to the weekend at T65.

The PGA Tour now heads to Ohio for the US$6.2 million Memorial Tournament where Tiger Woods will be defending his 2012 victory and eyeing off a record 6th Memorial title.

Woods will tee it up alongside newly-crowned Masters champion Adam Scott, who is returning to the Tour for the first time since his top 20 finish at the Players Championship.