Peter Weldon from NSW has claimed the SIFA Samoa Open after a final round interrupted by constant tropical downpours.

Weldon recorded a remarkable final round of 4-under par (68) in the conditions to finish at twelve-under par, two strokes clear of Victorian Peter Wilson and New Zealand’s Pieter Zwart. 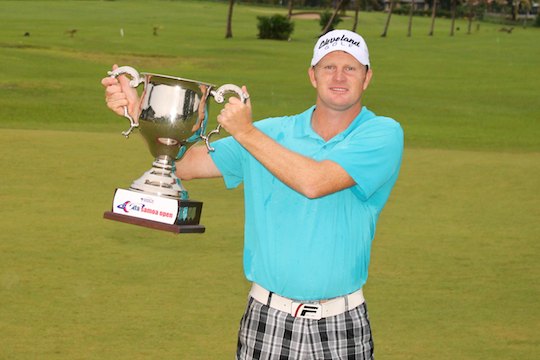 Monsoonal rain overnight caused play in the final round to be delayed by four hours as rivers of water engulfed the golf course. However, when play commenced it was Weldon who braved the wet and wild conditions.

“I played really good today. It was tough out there but I was just trying to stay relaxed and enjoy myself” said Weldon.

“I’ve been coming here for the last four years and I absolutely love it. It really is a beautiful place and this victory makes it even more special.”

Weldon started the final round one shot behind New Zealander Peter Zwart however by the turn the pair were level thanks to a birdie on the ninth by Weldon.

On the back nine, consecutive birdies on holes 14 and 15 extended his lead to two shots which ended up the winning margin.

The tournament also saw the Legends Tour competing in conjunction for the Samoa Senior Open, with Max Forrest (66,73,72) and Kym Olsen (67,72,72) sharing the spoils on five-under par.

Overnight leader Krishna Singh struggled in the wet conditions and finished with a final round of 78 and a tie for fourth.

Interestingly, Olsen was informed during the tournament that he had gained entry into this week’s US Senior Open but made the decision to remain in Samoa.

The joint winner’s cheque would provide some consolation for missing out on the Champions Tour’s most prestigious event.