American Richy Werenski holed a flop shot from the fairway on the par-4 16th for a five-point eagle and birdied the last for a one-point victory over fellow country man Troy Merritt on Sunday in the Barracuda Championship.

Werenski becomes the fifth straight first-time winner in the PGA Tour’s modified Stableford scoring event and earned a spot this week in the PGA Championship in San Francisco. He and Merritt also secured tee-times at the US Open in September at Winged Foot. 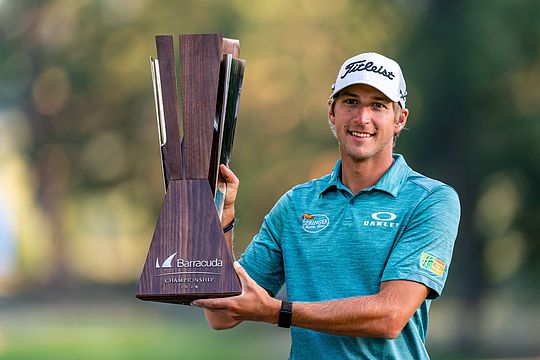 Werenski finished with 39 points, with players getting eight points for albatross, five for eagle, two for birdie, zero for par, minus-one for bogey and minus-three for double bogey or worse.

“It’s huge,” remarked Werenski. “I’ve been playing well for I feel like the last couple of months, but to get a win, I mean, that’s huge. I got a couple seconds and everything, so it just helps my confidence a lot. Now I know I’m good enough, and now we’re going to go make a good move for the FedExCup Playoffs.”

In 2016 he won the BMW Charity Pro-Am on the-then Web.com Tour. As an amateur he played college golf for Georgia Tech and in 2012 won the Porter Cup.

Matthias Schwab and Fabian Gomez tied for third with 37 points.

Cameron Percy was the best of the Australians in a share of 25th position with Cameron Davis in tie for 32nd position.

Rhein Gibson finished in 60th position to be the last of the Aussies to make the cut under the modified scorning tournament.