The Western Australian team lost just one of seven matches to take the title on total contests won from Queensland, including a stunning 3½-1½ smashing over host New South Wales on the final day to set up the series title on matches won. 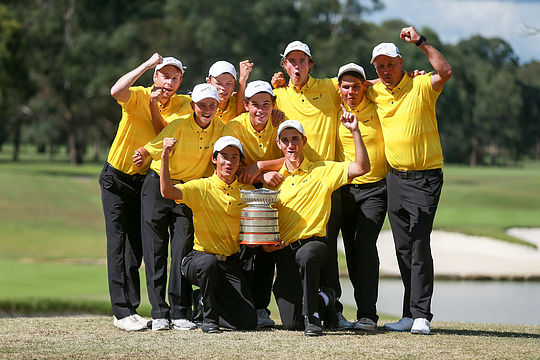 Fred Lee at number 1 for Western Australia was too strong for Josh Gadd winning their match 4&3, with Cooper Geddes at number 2 also collecting a strong 3&2 win over Jordan Garner.

After Jordan Doull at number 4 for Western Australia collected a 1-up win over Jye Pickin the result had fallen Western Australia’s way. Billy Watson secured NSW’s only match with a 2-up win over Connor Fewkes with Jones Comerford halving his match against Hayden Hopewell.

NSW, the joint defending title holders suffered three losses and a draw during this series, salvaging some late wins to finish in 5th position for one of its worst results in years following a string of stellar performances having taken the Junior Interstate Series in 2009-10-11 and in 2016.

Earlier Queensland secured a stellar 3-2 win over Victoria to move ahead on points for the runner’s up position with Tyler Duncan, Joel Stahlhut and Louis Dobbelaar all winning their matches.

It is the first victory for Western Australia since 2000, when the team of Michal Golinski, Scott Hunter, Nicholas Kowalik, Rick Kulacz, Michael Sim and Tigh Van Leeuwen shared the title with NSW at Nudgee Golf Club in Brisbane.