Western Australia won the Gladys Hay Memorial Cup for the third time in four years with a convincing 5-1 victory over New South Wales in the final of the Australian Women’s Interstate Teams Matches at Gungahlin Lakes Golf Club. 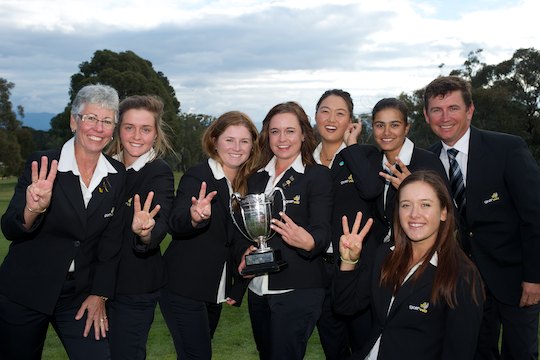 For Lee and Bettencourt, it was the third time they had been members of a winning team with the Western Australian team claiming the series in 2011-12. Other winning team members included Hannah Green, Alyssa Keir, Nira Haveed and Claudia Pisano.

The Queenslanders, led by wins for Jaimee Dougan, Gennai Goodwin and Amy Walsh prevailed 3.5&2.5 in the first consolation final.

South Australia defeated Tasmania in the second consolation final to make sure of fifth place.

World number five amateur Su-Hyun Oh from Victoria was the only player to finish the championship undefeated.

The 2015 Interstate Series are scheduled to be held in Victoria.