Gough birdied the first hole in the championship match and was never behind in the head-to-head clash with Gough making the turn with a comfortable 3-up margin only to move to 5-up over the first two holes in the afternoon. 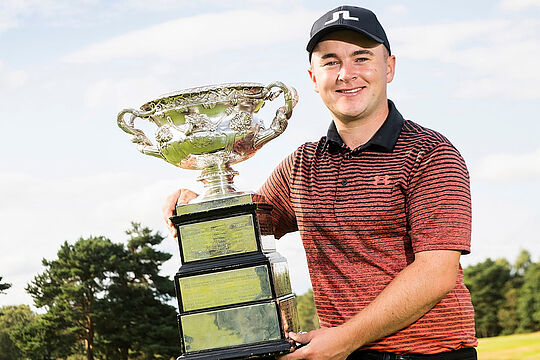 Addy, who hails from Perth, but whose parents are both English put on a stellar display over the closing stages of the final to regain holes to bring the margin back to just one hole with three to play.

On the 35th hole Gough had putts to win the match. He rolled the first one from the fringe five feet past the hole and then, after Addy had failed to make par, missed a slippery one back down the slope.

It all came down to the 36th hole where Gough hit a magnificent drive and a wedge to 6 metres for the luxury of two putts for the title.

“It’s a great feeling to win, I’m golfed out, but to have the trophy is great fun,” said Gough. “It was stressful, what a great player I was up against. I knew it was never done having looked at Tom’s games the last few days and he’s a good golfer.”

Addy was obviously disappointed, yet viewed the result in a positive way.

“Too many good putts just slid by, but full credit to John who was a deserved winner,” said Addy.

“I will take a lot away from this week. I’ve learned so much over the course of the championship that can make me a better player.”