Lee Westwood earned his 41st career win and his second Malaysian Open title with a commanding seven-stroke victory at the Kuala Lumpur Golf and Country Club on Sunday.

The Englishman completed his wire-to-wire win in style when he holed a 20-foot birdie putt for a final round 68 and an 18-under-par 270 winning total. 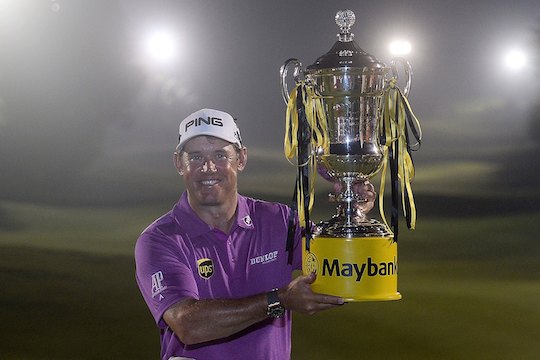 Westwood, a winner here in 1997, reinforced his reputation as an Asian specialist after extending his career tally in Asia to 13 victories.

The triumph came a week after the world number 36 finished seventh in the Masters Tournament.

“Yes this win has come at an important time. I’ve started working with a new coach and Billy Foster came back on my bag at the end of last year.”

“I’m going back to what I’ve done before because it works. It is starting to work already,” smiled Westwood, who turns 41 next week.

Westwood’s victory and solid performances in the last two weeks has given him hope of regaining his best form which saw him become world number one several years ago.

“My game now has the potential to get close (to his game when he was world number one).”

“But now I feel I’ve got a short game and I’m starting to roll in a few putts. It makes a lot of difference when you can make up-and-downs to keep the momentum going,” said Westwood.

Oosthuizen, the 2010 Open Champion, was in the thick of action before a pair of bogeys on nine and 10 dashed his hopes.

The South African took advantage of a four-hour weather delay and posted two late birdies on the resumption of play to share second.

“I had the perfect start for trying to give Lee a chase. But the bogey on nine and 10 stopped the momentum and I knew that it was over to chase him.”

“I finished well and I played nicely. I started awful this week but I’m happy with how I recovered after the first round,” said Oosthuizen.

Scott Hend and Wade Ormsby were the best of the Australians in a share of 18th place at four-under with Andrew Dodt two shots further back in tied 33rd.