Lee Westwood equalled his lowest ever round in a major with an opening 65 in the PGA Championship at Valhalla to share the clubhouse lead with Americans Kevin Chappell and Ryan Palmer on 6-under par.

Having missed the cut in his last four events before last week’s Bridgestone Invitation at Akron where the 41-year-old closed with 63. Today’s round was a remarkable turnaround for the Englishman. 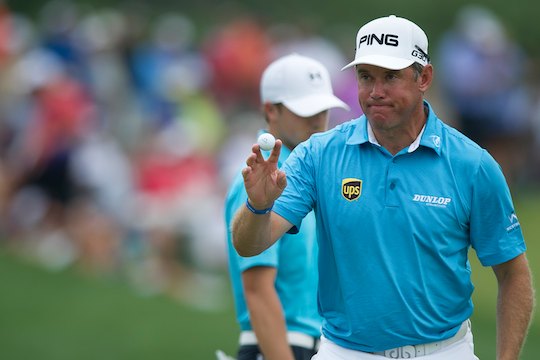 Lee Westwood thanks the crowd at the 2014 PGA Championship (Credit: Anthony Powter)

Click here to view 2014 US PGA Championship – Day One Gallery →

Westwood, whose previous lowest score in the US PGA was his opening 66 at Oak Hill last year, remains optimistic with his recent run of good form.

“Last week was a big week for me,” said Westwood following today’s opening round.

“I felt like I had turned the corner and I was starting to swing it a lot better but that’s no good unless you start converting it into low rounds.”

“Today, I played well all day. I got off to a nice steady start and I hit a lot of quality iron shots and it felt like 65 was a fair enough score.”

Playing with Westwood, Adam Scott opened with an even par round, which has the 2013 Masters Champion currently in a share of 53rd place.

Matt Jones was the best of the Aussies opening with an impressive 3-under-par 68 to be in a share of 11th place, three behind the leaders. Jason Day also opened well with a 2-under-par 69 to sit in equal 20th.

World number one Rory McIlroy came blasting out of the blocks making the turn at 32, only to find trouble on the 10th where he hooked his second out of bounds to run-up a double bogey.

McIlroy also three-putted the 11th to drop back to level par, but rebounded well closing with a string of birdies on 12,13,14,15 and 18 to finish with a 66 to be at 5-under and in a share of 4th along with Jim Furyk, Edoardo Molinari, Chris Wood and Henrik Stenson.

“I was really annoyed,” said McIlroy about his mistake on 10.

“It sort of knocked me off track a little bit. To come back the way I did it was great, I really needed that. It could have been a couple better but 66 on the first day is a solid start.”

Sitting one off the pace appears not to be an issue for McIlroy, who is riding a a wave of confidence since his win at The Open and at last week’s Bridgestone Invitational.

“I know where my game is,” McIlroy said. “I’m very confident with it. I’m really happy with everything. I try to read as little as possible. I have three more rounds to play and hopefully they’re as good as they were today.”

It’s early days yet, but McIlroy certainly appears to be focussed. Westwood also is playing confident golf and it will be interesting how the Englishman goes come Sunday if he’s still in the mix as he hunts his first major.

Tiger Woods’ struggles on course continued today when he signed off for a 3-over 74 to sit in a share of 109th. He will need to pull off something special tomorrow to have any chance of making the cut.

“I felt pretty good about how I played and the shots I hit. I need to get more feel for how this golf course is playing. I’m not used to seeing the chipping areas like this. We didn’t have that in 2000. It was just deep blue grass. That’s a bit of a different look and different options,” said Woods in his post-round interview.

“It feels great to be back here. The fans are enthusiastic. They’re loud. They’re into it. It’s a totally different golf course than what I played in 2000.”