Reigning Masters champion, Adam Scott, heads into the final round of The Open Championship just three shots behind England’s Lee Westwood, who heads the field by a stroke on three under par.

Tiger Woods and Hunter Mahan share second place on 1-under with Scott in outright 4th position at even par after rounds of 71-72-70.

Scott has set up a final day showdown alongside Woods and has put aside the events of last year at Royal Lytham. Woods himself will be seeking to win his first major title since the 2008 US Open.

“I think I go out there tomorrow not carrying the weight of the lead or not having won a major,” said Scott.

“So it’s a different feeling (from last year).” 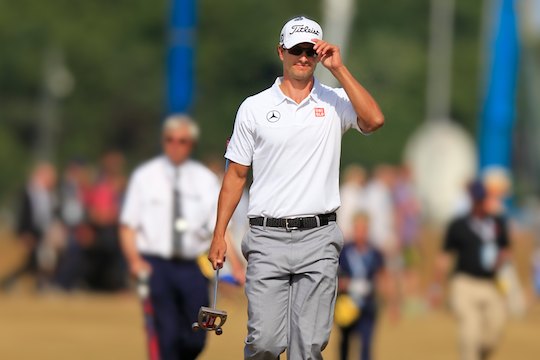 Adam Scott sits in equal 4th place going in to the final round of the 142nd Open Championship at Muirfield (Credit: Eoin Clarke/www.golffile.ie)

Tiger Woods has re-emerged as the number one player in the game with only a major championship keeping him from a full return to glory.

The prospect of his 15th major championship is just a day away but he will have to chase down Westwood, whose own journey to major glory has been longer and far more painful. Woods will also need to hold off a determined Scott and Mahan.

“I’m looking forward to it,” said Woods, whose 1-over 72 included a bogey at the par-5 17th, the same hole Westwood birdied to take a two-shot lead.

Each of Woods’ 14 major titles has come when he has held at least a share of the 54-hole lead, a trend he hopes to break tomorrow. Of his 78 PGA Tour titles, 14 have come when he was two strokes or more behind the leader entering the final round.

“I’m looking forward to the challenge of it,” said Woods.

“I’ve been in this position before in the past five years, and I’ve been in the hunt. And I’m in it again. Hopefully tomorrow I can play well and win the tournament.”

40-year-old Westwood, has 22 European Tour victories and the number one player in the world for a time moved to Florida earlier this year in hopes of giving himself better preparation for the majors.

“You try to picture yourself winning the Open Championship tonight, but forget about it tomorrow and go and tee off down the first and focus on it in the middle of the fairways with the first tee shot and then go from there,” said Westwood.

Yet you sense the pressure might be too much for the Englishman who has yet to win a major.

An Australian has never won The Open in the 16 championships staged at Muirfield, although in 2002 Stuart Appleby and Steve Elkington lost in a playoff to Ernie Els.

“Hopefully I can play enough quality shots to give myself chances to be in the hunt right at the end. It would be a fairy tale if were to happen. They do occasionally happen, so I’m not counting myself out of it at all.”

Five of the 12 Australians have made the weekend action.

Geoff Ogilvy is in a tie for 51st position at 9-over, Peter Senior is tied for 63rd position at 10-over alongside Marcus Fraser.