Westwood makes it a hat-trick at Indonesian Masters

England’s Lee Westwood claimed a hat-trick of Indonesian Masters titles in as many attempts when he held off Thailand’s Chapchai Nirat on the first play-off hole at the Royale Jakarta Golf Club on Sunday.

The former world number one two-putted the par-five 18th hole for the winning birdie while Chapchai, a four-time Asian Tour winner, could only make par after finding a greenside bunker with his second shot.

“There are a lot of good players on the Asian Tour now and the standard is getting higher on this Tour and it’s harder to come over here and win, especially today.”

“It’s nice to come back and play with them on their own Tour where they get to show everybody in Asia how good they are,” said Westwood.

“To come to this tournament this week and win it three times is obviously extra special.” 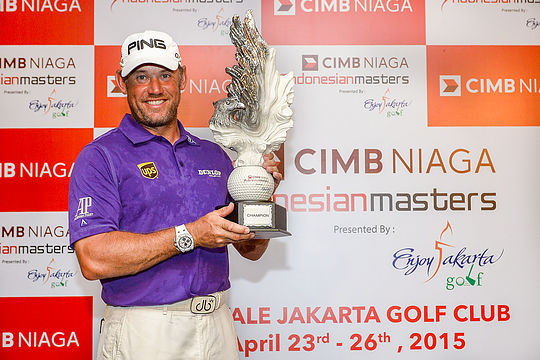 Playing alongside Denmark’s Thomas Bjorn and former PGA Champion Y.E. Yang in the final group, the Englishman shot three-over par on the front side before making three birdies early on the back nine to extend his lead to three with three holes remaining.

However, Westwood’s short game suddenly became shaky, missing successive short putts on the final three holes to fall back into a playoff with Chapchai, who had shot a final round 66 to finish at seven-under-par 281.

After finding the green for two in the playoff, Westwood was left with the identical putt he has just missed in regulation. This time he would make no mistake, sealing the victory just moments before the heavens opened.

“It was a tough putt coming into the hill over on 18. I misread it slightly and hit it to about five-feet and missed it. But fortunately in the play-off, I hit it to the exact same spot, I knew the line and it was a nice straight putt for the win.”

“I’ve never been beaten around this golf course which is great and this win will give me the confidence for the year ahead,” said Westwood.

Australia’s Kalem Richardson shot a final round 67 to finish a shot out of the playoff mix in outright third place at six-under, while Bjorn was alone in fourth place.

Korea’s Y.E. Yang celebrated a second top five finish in as many weeks as he battles back from the doldrums that have seen the former PGA champion and 2011 Presidents Cup representative drop to as low as 652nd in the Official World Golf Rankings.

The Asian Tour’s next stop will be from May 7-10 for the staging of the inaugural Mauritius Open at the Heritage Golf Club, Domaine de Bel Ombre.