England’s Lee Westwood claimed a unique Thailand Golf Championship double when he staged a fabulous fight back with a final round five-under-par 67 to win the US$1 million Asian Tour event on Sunday.

The 41-year old won the inaugural tournament in 2011 and captured his second, and the 42st of his professional career, with an eight-under-par 280 at the Amata Spring Country Club. 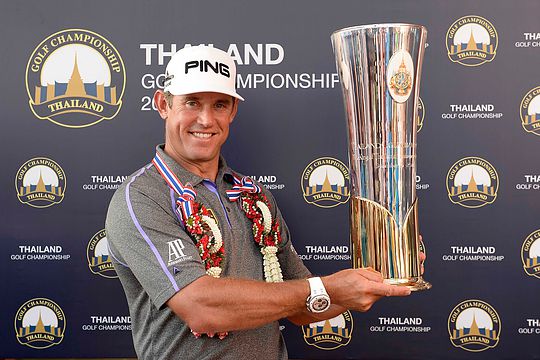 Westwood’s tally was one clear of overnight leader Marcus Fraser of Australia and U.S. Open champion Martin Kaymer who shared second at 281. Queenslander Scott Hend shot a final round of 69 to finish in outright fifth place at four-under 284.

Westwood was thrilled with the nail biting win to add to the Malaysian Open title he won in comprehensive style back in April.

“When I won the Thailand Golf Championship in 2011, I had a pretty big lead. But this win is obviously very special as it was a very tight day out there and I didn’t get off to the best of starts and I had lots of work to do,” said Westwood.

Starting the round two shots back of Fraser, Westwood stumbled out of the blocks with consecutive bogeys but strung together four straight birdies from the sixth and added three more on the back side at 11, 14 and 15.

“This is my last event of the year and it’s nice to finish with a win and go into Christmas and start the New Year with confidence.”

In just his fifth event back from an eight-month injury layoff, Fraser looked set to take the title with birdies on four, six and seven before trading birdies with bogies heading to the final holes.

Needing a par at the last to tie Westwood, Fraser missed a five-foot par putt to drop back into a tie with Kaymer.

“I gave a good fight and I’m happy with how I’ve played considering how I just got back to playing competitive golf recently,” said Fraser, who took some consolation from the disappointing finish by qualifying for the 2015 Open Championship along with Hend, India’s Anirban Lahiri and American Jonathan Moore.