What’s in the bag this time, Phil?

We’re still talking about it. That six-iron on the 13th hole.

Real golfers tell you it was the shot of the year. Fluke or not. 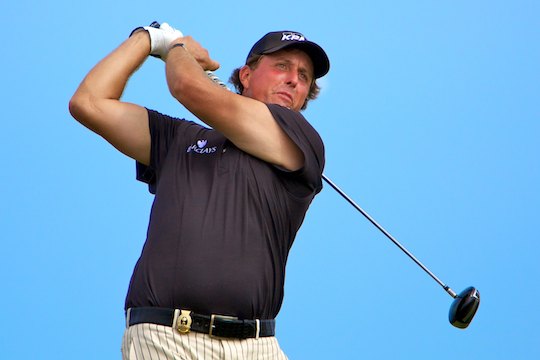 Defending Champion: What’s in the bag this time, Phil?

And if horses for courses were ever to ring true, then American left-hander Phil Mickelson could easily make it a fourth green jacket at this, his 19th US Masters, this month.

That club selection, an iron shot to six feet from beneath a tree on Amen Corner was the stuff that legends are made of.

And club selection remains a ‘major’ type of headache for Mickelson as he prepares for his favourite tournament of the year.

One year he carried two drivers and in some events he has carried as many as five wedges in his bag.

So deciding which 14 clubs get the nod for this year’s event is no mean feat.

And ever a student of the game, Mickelson has the perfect explanation for how and why he has chosen the make-up of his golf bag for past Masters.

“That year [the two drivers] was the first year the golf course had been lengthened with tee boxes moved back quite a few yards,” he said.

“To combat that, I tried to get a driver that I could hit an initial 20 yards [further].”

“Although I called one a draw driver and one a fade driver, the long driver was the driver that I drew.”

“But I also hit it 20 to 25 yards longer than I did my regular driver, it was also a longer shaft and so forth.”

“And I believe that it played a big factor in me winning the golf tournament.”

“Now the driver that I have, is very similar to that distance.”

“It might only be five or seven yards shorter than that driver, and so there’s really not a benefit to putting another longer driver in play.”

“So that frees me up to add another club.”

Mickelson also explained that he was pretty well “set” with his wedges now – so this master of the short game has no such selection issues for that section of the bag.

“I used to carry as many as five wedges,” he said.

“What I did was take the gap and sand wedge and kind of created a club in between.

“That allows me to add some other, longer clubs in the bag.

“And usually at Augusta, I don’t carry a hybrid, I usually carry a three-iron.

Mickelson also explained that the additional length on hole No. 4 a lot of the time left him between clubs . . . between a four-iron and a three-iron.

“So having a three-iron in the bag at Augusta is what has helped me the past couple of years for some of those in-between shots from 220 to 245 yards,” he said.

“And I no longer play with five wedges.

“I’ve had four wedges now and the same wedges for the past couple of years.”

When talk of the Masters comes around, and Phil Mickelson is involved, it invariably switches to one of the great Augusta moments of all time – one right up there with Tiger’s famous chip-in on the 16th.

And even Mickelson admits that when he arrives for a practice round at Augusta this year, he just might try his famous shot again from beneath that tree on the 13th hole.

“Yes, I probably will go to that spot,” he says.

“I hit that putt every time I play there, I always go back and look at it.”

“I very well may go to that spot again because that is an important spot, an important shot for the tournament last year, and I will look at that.”

“Although this time around I do plan on hitting the fairway all four days of the tournament.”

Mickelson hasn’t done anything special with that famous club – yet, although he does try and change his sets of clubs at least once a year.

“I keep the sets of clubs that I won major championships with,” he said.

“I usually try to change my clubs at least once a year, for the reason that I like to have a fresh set.”

“I like to have fresh grooves, and I usually wear down the face through practice sessions, especially the short irons where I spend most of my time practicing.”

“I do have every club in a bag in my golf room back home from last year’s win.”

“And I will be giving the six-iron to the club to put on display.”

Mickelson is like anyone else in the world – the hair stands up on the back of his neck when he drives through the gates and prepares to head up the famous Magnolia Lane to the front door of the Augusta National clubhouse.

“It excites me like you wouldn’t believe,” he says.

“It reminds me of when I was 10-years-old watching Seve Ballesteros win in 1980 and saying to my mother ‘I want to win that tournament. I want to be like that and win this event’”.

“It reminds me of the dreams that I had as a child and I feel like Augusta National and the Master tournament gives every kid in the game of golf who dreams of playing professionally, dreams of winning major championships, something to strive for, something to dream about.”

“And when we arrive on the premises at Augusta, it exceeds our dreams.”