You want to know what’s really wrong with Tiger Woods? He ain’t 21-years-old any more…and that’s just about it.

Missing the cut at last week’s British Open at Royal Portrush is probably something we should get used to seeing. 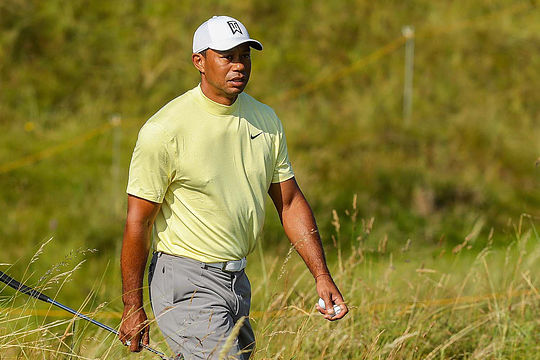 Theories on what was wrong came from everywhere after Tiger’s early exit in Northern Ireland.

And he did look to be playing in slow motion – and they’re weren’t too many smiles there either.

But that is golf in Northern Ireland – you’ll get all the seasons in one day – and that doesn’t suit the 43-year-old former world No 1. Not any more, anyway.

While Woods has suggested he will be playing less golf and trying to look after his body, there’s no doubt he cannot do the things on a golf course that he once did – even though he won the US Masters in April.

“I’m just not moving as well as I’d like,” Woods said after his first round 78 in Northern Ireland.

Even after a one-under 70 in the second round, Woods made no excuses for his missed cut or less-than-stellar play.

“This is just me not playing well and not scoring well, and adds up to high scores,” he said.

“I just want some time off just to get away from it.”

“I had a long trip to Thailand and then trying to get ready for this event, to play this event, it’s been a lot of travel, a lot of time in the air, a lot of moving around and different hotels and everything.”

Woods then gave the real reason why he didn’t fire at the Open Championship in 2019: