What an amazing performance. Michelle Wie, who had not won since her US Open victory of 2014, left herself with some unfinished business at the HSBC Women’s World Championship last year when she fell away in the final round.

This year, though, she got the job done, coming from five shots back to hand in the 65 which left her at 17-under and one ahead of Jenny Shin, Nelly Korda, Danielle Kang and Brooke Henderson.

In the end, what separated Wie from the pack was a massive putt on the 18th. The watching Lydia Ko thought it was a good 35 yards but, inevitably, it was one of those putts to grow in the telling. By the end of the day, it was a minimum of 45 feet.

Wie could have chipped it but always she saw it as a putt. Normally, she would have decided on the line for herself but, on this occasion, she called upon her loyal caddy, Matt Galloway, for a second opinion. 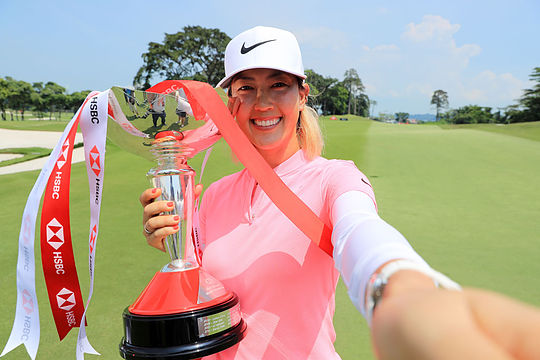 As she would laughingly reveal, Galloway’s first move was to ask her whether the little hole in the grass ahead of them was above or below the line. “Above,” she advised – and he concurred.

The ball shot from the putter and it was never going to stop short. It fairly slammed into the hole and Wie reacted with a hop, a skip and a jump as spectators leapt from their seats.

If the 75-footer that Paula Creamer holed as she won the title in 2014 has to take precedence, Wie’s monster created no less of a sensation in that it had to be holed if she was to separate herself from those at her heels.

Henderson was already back in the clubhouse but all three of Korda, Shin and Kang had still to play the last.

In the end, Korda was best-placed – she had a six-footer – to force a play-off. When it missed, both she and her sister Jessica looked as deflated as each other for, right up until the end, Nelly had been in with a chance of matching Jessica’s victory of the previous week.

Wie, whose fifth win this is on the LPGA tour, was practising her putting when the news came. At that point her practice putts gave way to a succession of hugs – with her caddie, her parents and a host of sister players among the recipients.

The player could not have spoken more warmly of her parents’ contribution to her career.

She said that the first thing she visualised as her putt went down was her parents, B.J. and Bo, celebrating to the side. “Through good times and bad, they have always been there for me. With their on-going belief, I started believing in myself again.”

Injuries and poor form followed after her US Open triumph but, after starting on the road back over these fairways twelve months ago, she carried on picking up confidence.

This week, it reached a high as she whacked her tee shots with ever more in the way of relish. If David Leadbetter, her coach, had been awake back home, which she thought he might be, he would have felt inordinately proud.

What does winning mean to Wie? “It means everything. There’s no better feeling. It’s what makes you practice.”

Sarah Jane Smith (T39), Katherine Kirk (T43) and Su Oh (T48) rounded out the Down Under players to make it through to the weekend.