Wiesberger entered the final round with a three-shot lead and eight shots ahead of Fleetwood but the Englishman fired a stunning 63 to set the clubhouse target and share top spot at 16 under. 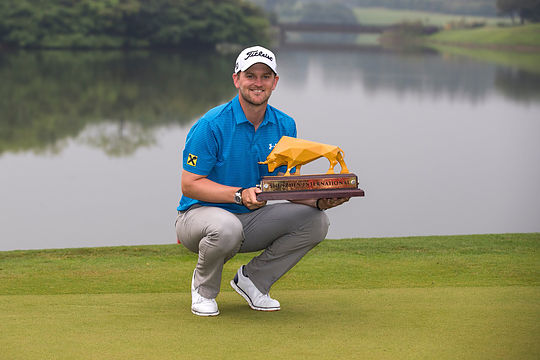 As most of the leading challengers fell back, Wiesberger made excellent par saves on the 12th and 17th and nearly hitting the pin with his approach to the last but was forced to settle for a par and a trip back up the 18th in the pouring rain.

Wiesberger took the risky line over the water off the tee and ended up in the bank while Fleetwood played safely onto the fairway and found the heart of the green with his second.

The pressure was now on Wiesberger and he delivered, putting his approach to five feet and rolling in the putt for a birdie and the victory.

The triumph is the culmination of an excellent run of form from Wiesberger, who has not missed a cut since the US PGA Championship, claiming seven top five finishes in that time.

His eighth gives him his fourth win on the European Tour in his 200th event and his first in a play-off after losing the previous three times he had gone to extra holes.

“I’m feeling a bit relieved now I have to say,” said Wiesberger. “I’ve had a stretch of really good events the last couple of months and it’s really nice to have a trophy again.”

“We have really good players out here, all up for it, playing well and throwing a lot at me. At the end of the day I’m just glad I got myself into the spot where I could play for the title.”

Meanwhile, Fleetwood was flying through the field, birdieing the second, sixth and seventh but even when he chipped in to eagle the ninth, he still looked a long shot.

Another birdie followed on the 13th to keep him within touching distance before a hat-trick of gains from the 15th took the Abu Dhabi HSBC Championship winner to the top of the leaderboard on a course where he has never shot over par.

“I’ve played well all week and I was really disappointed, it was stressing me out that I couldn’t really get anything in the hole,” said Fleetwood.

“Today, just a few putts went in and I kept it going all the way through and it was a good time to shoot a 63.”

Wiesberger finished his round with 11 pars but needed to show all his grinding qualities, getting up and down from a plugged lie on the 12th and saving par on the 17th after finding the water off the tee.

England’s Ross Fisher finished with a 68 and held a share of the lead stood on the 18th tee but a three-putt bogey saw him fall out of the play-off.

Brett Rumford was the best of the Australians finishing in a tie for 14th at 11-under. Andrew Dodt surged up the leaderboard with a final round 5-under 67 propelling him in to 33rd place.