Wiesberger claims third title of the season in Italy

Austrian giant Bernd Wiesberger celebrated his 34th birthday last week and can pop the champagne again after becoming the first triple Tour winner this season thanks to a final round 65 at the Italian Open this morning.

Earlier this year, Wiesberger captured the Made in Denmark and just five events later landed the biggest win of his 13-year pro career in capturing the Scottish Open. 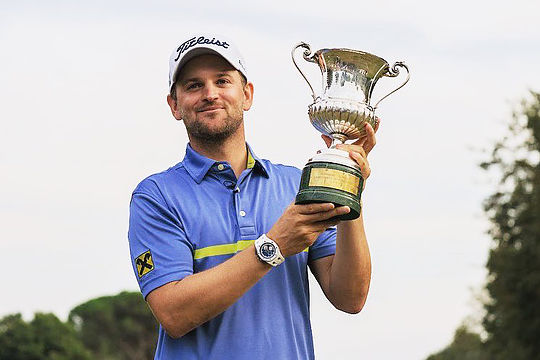 In his seven Tour victories, Wiesberger has now won a French, Scottish and Italian Open titles.

He is also the first Austrian to win the Italian event in its almost 80-year history after compatriot, Marcus Brier, lost out in a play-off for the title in 2007.

And in the 2019 Race to Dubai picture, Wiesberger has lept his way to the top of the rankings in the goal to end the year as the European No. 1.

Wiesberger arrived in the Italian capital third on the Race to Dubai trailing 865 points adrift of front-running Spaniard, Jon Rahm and 502 points behind major winner Lowry in second place.

“It’s amazing to again win as it’s been a great summer for me as I’ve shown a lot of good golf and shown lovely progress after my injury last year,” he said.

“So, I am just enjoying my time out there an enjoying getting back into these situations. It has been a tough week here in Italy but I stuck with the job to keep making that one extra putt and that really worked today.”

“It would be amazing to end the year as European No. 1 but then I have played well in a lot of events including the Irish Open, the Scottish Open and here this week that has helped getting up to the top of the Race to Dubai,” he said.

“So, it’s really excited what is a ahead in my last four events.”

And South African-born and now Slovakian national, Rory Sabbatini has taken his first first step in hopefully creating a Ryder Cup first signing off for a 66 and a share of 10th place at eight-under par.

Sabbatini married the cousin to the vice-president of the Slovakian Golf Federation and earlier this year the now 43-year old changed his citizenship to Slovakian.

It was a move also that could see Sabbatini represent Slovakia in the 2020 Olympic Games.

Lucas Herbert showed the way for the Australians closing in a share of 34th place at 3-under with Wade Ormsby another shot back in 40th place.

Jason Scrivener was the only other Aussie to make the cut after Sam Brazel and Scott Hend missed the weekend action.