There were celebrations all round for Bernd Wiesberger in successfully defending his Made in HimmerLand title in Denmark.

Wiesberger, 35, won with ease by five shots in posting a closing round 64 for a 21-under par tally under preferred-lie conditions.

The win is Wiesberger’s eighth European Tour triumph and will see him go back inside the top-50 on the World Rankings. It comes in a week when his father celebrated his 60th birthday and his mother turned…’I'm not allowed to say’ said Wiesberger smiling, on the final day of the Danish tournament.

Italy’s 24-year-old sensation Guido Migliozzin was runner-up for his second event running in posting a closing 63 to finish on 16-under par and one clear of the trio of the England pair of Richard Bland (66) and Jordan Smith (76) and Australia’s Jason Scrivener (66).

Bland’s effort keeps him at the top of a three-event, US Open mini money list, that will conclude next Monday week at the June 7th concluding Porsche European Open in Germany with Migliozzi second in line for a US Open tee time and now Wiesberger third.

The top-10 otherwise not exempt into the US Open will travel to Torrey Pines for the June 17th commencing third major of the year. 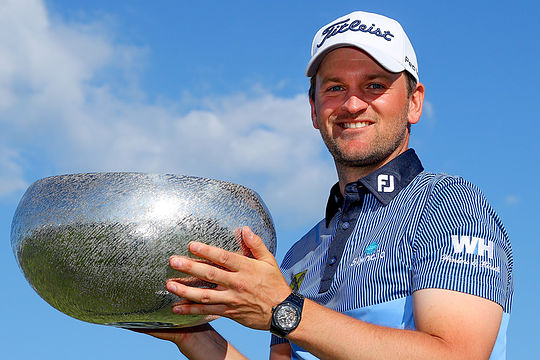 Though the main story in Denmark was Wiesberger, who led from start-to-finish.

“I really like it here, playing here is good for my confidence especially after a couple of tougher weeks so it’s a special place for me,” he said.

“I played really good golf. It brings out the best in me, I got it going when I needed to so it was really enjoyable.”

What’s In The Bag: Bernd Wiesberger

“It’s an awesome week obviously, I wasn’t really coming in on my best form missing the cut last week and not really performing to what I would like to. It was definitely a week where I felt like a chance to find something again and that’s what happened.”

And in being handed the silver bowl trophy, Wiesberger said smiling: “If I win this three times next year, I get to keep the trophy, okay?”

Jason Scrivener did well to back up from his appearance at the PGA Championship last week where he finished 23rd. His race back across the Atlantic paid off with a share of third place resulting in a cheque for €70,619.20 (A$112,000).

The Western Australian now moves up one spot to 7th on the Race To Dubai.

Wade Ormsby was next best at 19th after a superb final round 65. Jarryd Felton and Min Woo Lee shared 52nd place while Dimi Papadatos rounded out the Aussies at T68.