Some, no, make that many, fellow professionals felt he probably should have been disqualified.

Yet Phil Mickelson’s self-confessed brain explosion at the US Open was certainly the biggest talking point out of day three at Shinnecock. 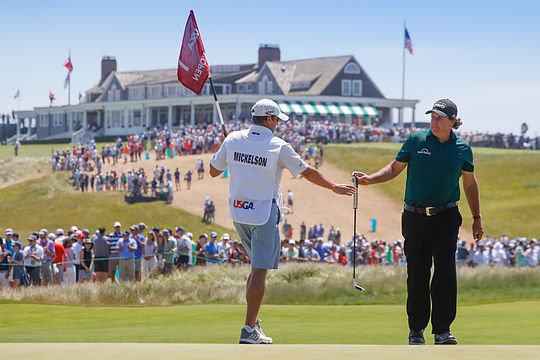 And even though Mickelson dodged the media on the final day, his wife Amy was quick to spring to his defence when nailed down by the press for her reaction to the histrionics.

In case you missed the action, when Mickelson’s putt missed the hole on the 13th and threatened to gain momentum and roll off the green, Phil had a brief explosion, raced after the ball and putted it back towards the hole – before it had stopped moving.

He later offered to withdraw from the tournament and called USGA executive director Mike Davis and told him so.

Mickelson knew that under Rule 14-5 his actions on the 13th green — striking a moving ball — would cost him two strokes, but he was less aware that officials could, theoretically, have also applied another more damning rule. Under Rule 1-2, officials could have deemed that Mickelson’s actions gave him ‘a significant advantage’, resulting in disqualification.

Davis instead told him withdrawing would not be necessary and that USGA officials had reviewed his actions and decided that the two-stroke penalty was the appropriate penalty.

“He’s a good man who had a bad moment,” said wife Amy as she watched the popular American signing autographs after the final round.

“He’s not perfect — I’m not, you’re not. … You might have a bad day at work or do something or say something that you regret.”

“When [players] do it, it’s on a very large stage and there’s so much immediate reaction on Twitter and social media, it can overwhelm.”

For his part, Mickelson did admit it was not his finest moment.

Yet the New York fans, who shouted so many inane comments after players hit during the tournament, strangely, let Mickelson be on the final day. There were no heckles during his final-round of one-under 69.

“It [the incident] was very uncharacteristic,” said Amy.

“If he acted like that all the time, I think that’s different. I think everyone should be allowed to have a moment.”