Aaron Wilkin has secured a breakthrough victory at the Queensland PGA Championship in Brisbane.

Wilkin closed with a final round of 68 to force a play-off with Justin Warren who carded a final round 67 at Nudgee Golf Club in the city’s north. Warren had a chance for victory with a par putt from a metre at the first playoff hole, yet missed to extend the tournament to a 74th hole. 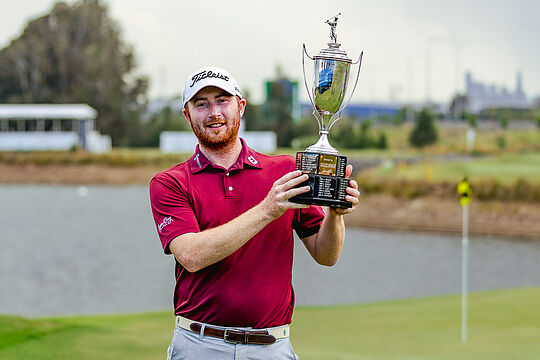 Playing first, Wilkin found the front-left portion of the green on the second play off hole to apply the pressure. Warren’s tee shot missed to the right of the greenside trap to leave a delicate chip to save par.

Wilkin rolled his birdie putt nicely from 19 metres to tap in distance of the hole. When Warren missed his long par putt the victory fell to Wilkin.

“It’s just the monkey off the back,” said Wilkin. “I’m definitely good enough, I just needed to do something like this maybe. It lets me know that I can do it. I wouldn’t say I’ve been knocking at the door but I’ve just been wanting to win for a while. It’s good to do it in front of my family and friends.”

Wilkin’s previous best finish on the PGA Tour of Australasia was a tie for third at the TPS Murray River at Cobram-Barooga in February.

Playing in just his fourth professional tournament, Jak Carter was outright third at 3-under, Daniel Gale and Lachlan Barker tied for fourth at 2-under par.

The Qld PGA Championship has a long history dating back to 1926. Notable former winners of the event include major champions David Graham, Greg Norman and Ian Baker-Finch.

In addition, 2015 PGA champion Jason Day narrowly lost out in a playoff in the 2005 event when it was part of the Von Nida Tour.