Will Australia get the good or bad Bubba

Aussie Open fans and officials, be warned – there could be a PR nightmare on his way.

Bubba Watson will hit Sydney and Melbourne later this year for the Australian Open at The Lakes and probably the Presidents Cup at Royal Melbourne. 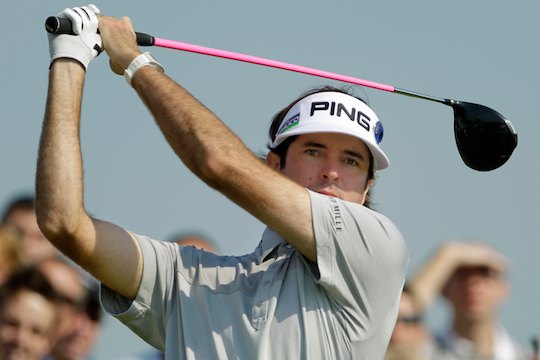 And after watching his performance in France recently, well, who knows what to expect?

While playing in the French Open, Watson turned his visit into a circus with the American hurling his toys out of the pram in one of the most distasteful showings by a golf professional for some time.

He was on the cover of French golf magazines and promoted heavily in newspapers.

But the American left the country with the worst headlines for some time.

It’s understood Watson was presented with a limited edition $US600,000 watch, along with two first-class air tickets and two suites in the stunning Trianon Palace.

Watson, who lost a play-off to Robert Allenby for the Australian Masters, is better-known for also losing a play-off to Germany’s Martin Kaymer in last year’s US PGA Championship at Whistling Straits.

But as soon as he arrived in France he began ruffling few feathers in declining requests for pre-tournament interviews including one with the London Times that had been prearranged.

The tone for a bizarre week for the world No. 12 was really set when he attended an early Wednesday morning press conference.

One of the first questions Watson was asked if he had visited Paris and checked out one of the great cities of the world.

It was Watson’s first visit to France and the Continent but surely you would have expected the player born in Bagdad, Florida to at least know the name of some of the world’s most famous landmarks.

“I saw the big tower (Eiffel Tower), an arch in the middle of this circle I rode around, and what’s that building that starts with an L?” said Watson.

“The Louvre”, came the response from the mainly French press contingent.

“The reason to come over here was just to experience it, to play a great tour,” Watson added.

“I’ve played on the US Tour the whole time and I just wanted to come here and experience a different culture, different lifestyle, different golf, different atmosphere.”

“And so I just wanted to come here and be a part of this and try it out, and to check out Paris and play a great golf course that was recently awarded the Ryder Cup in a few years time.”

Then the demeanour of the 32-year-old, who is married to a former star American basketball player, changed on day two of the event when he easily missed the cut.

His comments to TV, at one of the more prestigious events on the European Tour, reminded us of the ugly American tourist scenario of decades ago.

He said: “It’s just been different. It’s not a normal tournament. It’s just different for me.

“There’s cameras, there’s phones, there’s everything. No security. I don’t know which holes to walk through.”

“There’s no ropes. It’s just different. And I’m not used to that.”

“I’m not comfortable and it’s very strange to me, and just very uncomfortable.”

Within an hour of Watson’s comments there was six pages of ‘Twitter’ from those appalled by his remarks including such comments as:

“Gary Player and Ernie Els are in the Royal Box at Wimbledon. Will Nicolas Sarkozy be joined by Bubba Watson tomorrow?

“Bubba if you love home so much does that mean you are missing The Open. Here’s hoping!”

Surprisingly, not once did Watson complain about cameras or crowd behaviour at any point during his second round.

Also he hardly went out of his way to connect with the crowd after being applauded for many good shots.

Watson has won three times on the PGA Tour, including twice this year while he was a member of last year’s losing USA Ryder Cup team.