Will Woods pick himself to play Presidents Cup?

It’s possibly the first hint that Tiger Woods has given that he just might pick himself to contest December’s Presidents Cup at Royal Melbourne.

Sure, he’ll be there, he’s the captain of the US team. 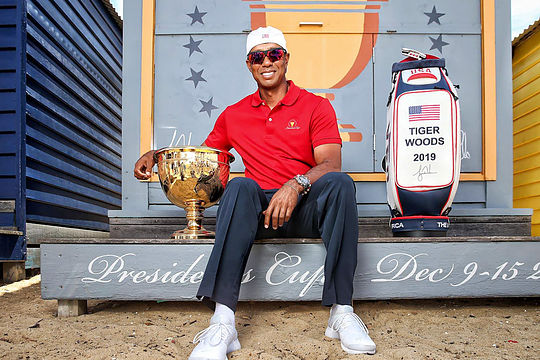 But even before he teed it up in last weekend’s BMW Championship, where he finished 37th, 18 shots behind runaway winner Justin Thomas, Woods declared he still wanted to play.

Clearly the former long-running world No 1 doesn’t want to head all the way to Australian to sit in a golf cart and watch his fellow Americans contest the cup.

Even a win at Medinah last weekend would not have been enough to get Woods into the top eight who are automatic Presidents Cup selections for the US.

So that leaves Woods with four captains picks to join the eight who are already assured of being there – Brooks Koepka, Dustin Johnson, Matt Kuchar, Justin Thomas, Xander Schauffele, Webb Simpson, Bryson DeChambeau and Patrick Cantlay.

“It’s going to come down to the top eight guys, myself and my vice captains about who are the next four slots,” said Woods.

“And whether that’s me and three other guys, or it’s just four other guys.”

Yet it is going to take a brave man to leave out any of those Americans on the cusp of making the team.

Woods is fully intending to play the week before the Presidents Cup, at his own Hero World Challenge in the Bahamas before he heads Down Under with other members of the team who’ll play in his event.

“Either way, I’m going to Australia,” he said.

“It’s just whether I’m going to be playing or not.”