Willett emerges from the dark to win BMW PGA

Danny Willett has brilliantly climbed his way from the ‘dark places’ he had plunged to following his US Masters win to claim one of the European Tour’s flagship event at the BMW PGA Championship this morning.

Willett had just a tap-in birdie putt on the final green in a round of 67 to win by an impressive three shots at 20-under par on the Wentworth course.

The 2016 Masters champion captured his seventh Tour title and his first on English soil. The win also moved him straight to the front of the line for the 2020 European Ryder Cup qualifying process.

“Winning on British soil for the first time after I’ve been to so many dark places in the past few years is one of those fairytale stories you never expect to come true,” he said.

“There has been a lot of turmoil to go through since the Masters, and no-one apart from my wife Nicole and the members of my team have seen how much hard work went into turning things round.”

“Even on the bad days I realised playing golf for a living is a really beautiful thing to do. It’s all I ever wanted, so I’m incredibly proud to be in this position again.”

“I’m incredibly proud of what I’ve been able to achieve in the last 12 months.” 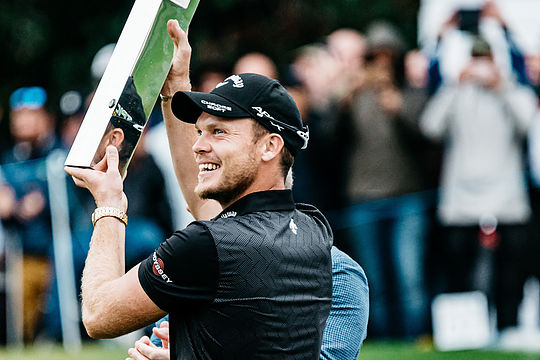 Spaniard Jon Rahm, who had been tied with Willett heading into both the third and final rounds, put his second shot into the water guarding the 18th green but managed to salvage par in a round of 70 for a 17-under par tally.

Willett went into freefall after capturing the Masters including plunging to World No. 462 in missing the cut at the 2018 BMW PGA though the father of two did have a delicate reason for not being up to his best that week having undergone surgery for a vasectomy the week before.

To his enormous credit the now 31-year old never lost his affable nature enduring missed cut after missed cut until he heralded a superb return to his best in capturing last year’s season-ending DP World Tour Championship in Dubai.

Now after his victory at Tour HQ, Willett will wake up as the new World No. 31.

Four Aussies lined up this week but none made the cut with Lucas Herbert (T75), Wade Ormsby (T75), Jason Scrivener (T86) and Scott Hend (T103) all enjoying the weekend off.