Willett, 28 has also moved into third place on the Ryder Cup points table after holing a 12-foot birdie putt at the last in a round of 69 to win by a stroke with an 18-under par tally on the Emirates course. 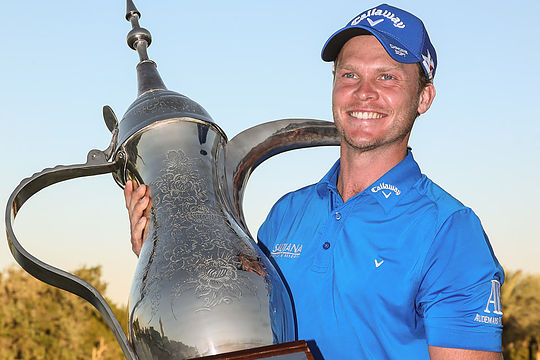 It is the Sheffield-born Willett’s fourth Tour title and with his wife, Nicole to give birth to the couple’s first child at the end of March.

Willett’s wife is due to give birth to the couple’s first child late March/early April just prior to the Sheffield golfer heading off to the Masters.

And with four England-born players now among the top-eight on the Ryder Cup points table the four-time Willett singled out the bond between each.

“You get eras where there’s been good England players like Westwood, Poulter, Donald and Casey and now in my era there’s myself, Woodie (Chris Wood), Sullie (Andy Sullivan) and also Matt (Fitzpatrick), “ he said.

“But then when I played Home Internationals 10 years it was a pretty strong England team and the England lads are just feeing off each other.”

Willett holed a testing 12-foot birdie putt in a final round 69 to win by a shot with a 19-under par tally on the Emirates course.

Willett collected his fourth European Tour title and the first that will see his name on the same trophy as McIlroy after the pair were GB&I team-mates in the 2007 Walker Cup.

He began the day with a one-shot lead and opened that up to three shots twice before showing nerves of steel at the 72nd green.

“I’m ecstatic,” he said. “You can’t buy that feeling, coming down the back nine, the last three holes, in contention in a golf tournament. It’s something that you can’t pay for in life. You’ve got to earn it.

“Coming down the last with all the situations that were going on. It’s just nice to know that I can dig deep there and produce.”

“It’s a relatively daunting last hole. I needed to make a four to win. So I’m just delighted with how I dug deep and found it.”

Scott Hend was the best of the Aussie in a tie for 8th with Brett Rumford another three strokes back at 11-under and tied for 24th.