(Dubai, UAE:) Danny Willett has bravely ended a 953-day winless drought to claim the biggest prize on the European Tour with victory at the DP World Tour Championship in Dubai.

Despite a near disaster at the last, Willett managed to brilliantly save par for a round of 68 and win by two shots with an 18-under par tally for his sixth European Tour victory.

The win is Willett’s second victory in Dubai after claiming the 2016 Omega Dubai Desert Classic but his first since April that year when he won the Masters.

The 31-year-old’s drive up the last came to rest inside the marking of a hazard that splits the final fairway and just short of dropping into the water.

Willett then brillantly got the ball back onto the fairway to save par. 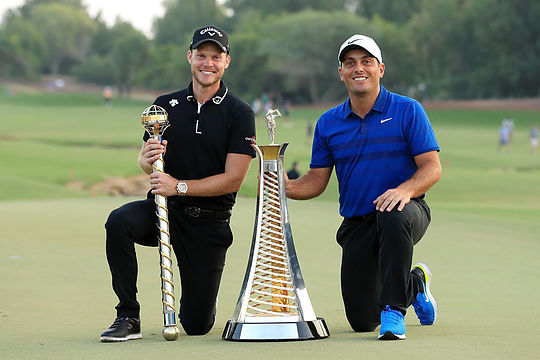 “I’m massively proud of myself,” said the Englishman. “It’s been a lot of hard work. It’s been tough [the past two years].”

Willett won his first major at Augusta two years ago but slipped from a career-high of 9th in the rankings to outside the top 450 earlier this year because of injury and a loss of form.

He shared the lead with America’s Patrick Reed going into the final round, but went three shots clear with an eagle on the par-five second and then made birdie on the seventh.

He lost that lead after bogeying the 10th and 12th, but birdied three more holes before holding his nerve on the 18th.

“You never quite know when a win is around the corner. With everything that’s happened you’re never sure if another win is going to come,” Willett said.

“I’ve started pretty slowly on the first four or five holes all week – but I got off to a quick one today. For that to happen on a Sunday in the position I was in, I knew I was in a good place.”

Defending champion Tommy Fleetwood needed a victory this week to deny Francesco Molinari the Race To Dubai title, however, a closing 68 was not enough and the 2018 Open champion and Ryder Cup hero was crowned as the European Tour’s top player – the first Italian to claim the honour.

Wade Ormsby finished in a tie for 30th place following a final round 3-over 75 while the only other Australian in the field, Lucas Herbert, shared 49th place.