England’s Danny Willett climbed to the top of the leaderboard after closing with a flawless five-under-par 65 to win the Omega European Masters on Sunday.

Victory was especially sweet for Willett as the Swiss showpiece was his third victory as a professional and beat his previous best finish of tied-second at the Omega European Masters in 2012. 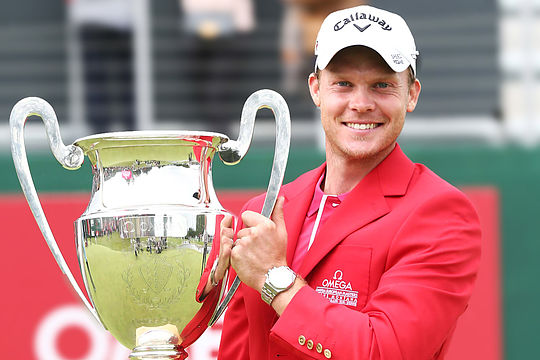 Willett, who shared the overnight lead with compatriot Matthew Fitzpatrick, signed off with a winning total of 17-under-par 263 to finish one shot ahead of Fitzpatrick after the former US amateur champion failed to birdie 18 which would have forced a play-off.

“It was a great day. I played some really good golf. Matt [Fitzpatrick] was snapping at my heels all day, so I’m delighted to get the job done. I kept really calm all day, and just waited for the chances to come. Winning is always tough, and the heart rate on 18 was pretty high. I’ve worked really hard so it’s nice to get the rewards for it,” said Willett.

“The season has been very, very good. Two wins and good performances in Majors and World Golf Championships is more than I could’ve hoped for really, but I’ve worked really hard so it’s nice to get the rewards for it.”

England’s Tyrrell Hatton carded the day’s lowest score of 62 to take third place while Sweden’s Pelle Edberg enjoyed the best result of his season with a fourth-placed finish after a 63.

The €450,000 first prize moves Willett into second place on The Race to Dubai and just 300,000 points behind leader Rory McIlroy.

The final round challenge from Korean-American David Lipsky, who was hoping to become the first player to successfully defend his Omega European Masters title since Seve Ballesteros (1977-78), did not materialise as the reigning Asian Tour Order of Merit champion struggled to a 73 and finished tied for 16th.