The championship match was an evenly contested affair with the turning point occurring on the 16th green following an extended rain delay.

After reaching with their approach shots play was stopped as thunder, lightning and rain hit the area.

After 102 minutes, the finalists returned to the course and Williams’ par putt from three metres gave him 2 up with two holes to play. 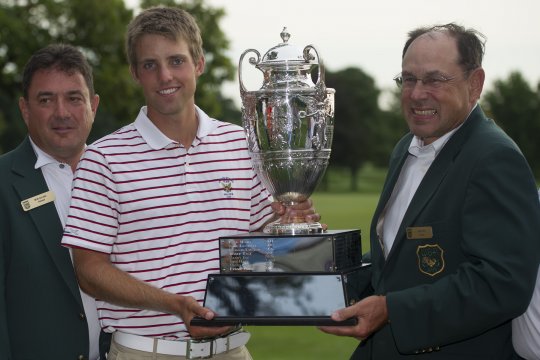 “That putt on the 16th was critical,” said Williams.

“I left a 40 footer too short after not putting for nearly two hours. The next putt moved right six inches and found the cup. That was the turning point in the match.”

Williams led by two holes with two to play, but when Russell, a 2011 US Amateur semi-finalist, made a birdie from a bunker left of the 17th fairway Williams’ lead was down to one with one to play.

Russell then stuck his approach on the 18th to eight feet keeping his championship hopes alive. Exmoor’s 18th did not give away may birdies this week and it again proved to play a pivotal role in championship golf.

Russell’s right-to-left putt caught the left lip, leaving Williams a putt of less than three feet for the victory.

“I was shaking,” said Williams.

“My heart was pumping and I was sure that Jordan would get the putt and we would be heading back down the first.”

Williams, a University of Washington senior who has won many tournaments and played on the 2011 US Walker Cup team, called today’s win the biggest so far in is career.

“This is massive,” said Williams.

“This is the won that you want to win with all the history and the players who have previously won the title.”

Williams’ name will be inscribed on a trophy along with champions such as Jack Nicklaus, Ben Crenshaw, Curtis Strange, Hal Sutton, Phil Mickelson and Tiger Woods.

Last year at the Western Amateur Williams also won medallist honours but was eliminated in the first round of match play by Patrick Cantlay, who now plays on the PGA Tour.

Williams, who entered ranked fourth in the world among amateurs with the win takes the world number 1 ranking from Bobby Wyatt.

To top it off, Williams was medallist and set the Western Amateur record by finishing the four-round stroke play at 17-under par.

Williams is the first player since Danny Lee in 2008 to win both medallist honours and the overall championship.

The pair will next compete at the US Amateur championships in Denver commencing 11 August.