England’s Oliver Wilson has won the Made in HimmerLand tournament on the DP World Tour with a one stroke win over Scotland’s Ewen Ferguson in Denmark.

Wilson finished at 21-under par for his first DP World Tour title in eight years. He started the final round in a share of the lead with Matthew Southgate, Francesco Laporta and Ross McGowan and made his move over the back nine with birdies on the last two holes for the win.

“Everything I’ve done to this point to rebuild my game, I knew I could do it. I was so calm there, I almost enjoyed the last hole. It’s pretty special,” said Wilson.

“I’m so proud of myself and I’ve got a great team around me. There’s been some dark times and they’ve all stuck with me so this is for them as well.”

Wilson’s previous win on the tour was at the Alfred Dunhill Links Championship in October 2014, and he had not recorded a top-10 finish on the DP World Tour since a tie for fourth at the same event in 2019.

Ferguson was seeking a third win of the season and began the day two shots behind the leaders but eagled the par-five eighth and birdied the 14th to take a two-shot lead and signed for a 66 to set the clubhouse target before Wilson made his move with birdies on the 13th, 16th and 17th to retake the lead and the par at the 18th for the win. 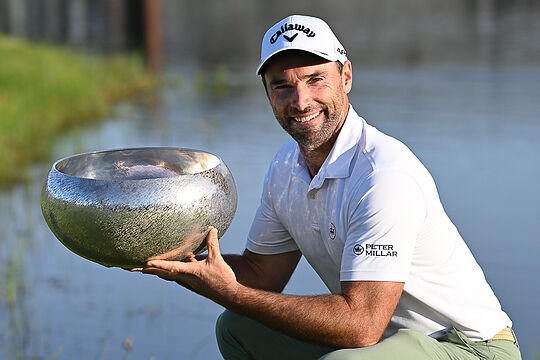 No Aussie made the weekend with Maverick Antcliff the best in 100th place followed by Zach Murray and Dimi Papadatos. Elvis Smylie missed another cut finishing 136th. Scott Hend also failed to perform with rounds of 80 and 77 seeing him finish in last place.

The DP World Tour moves to the BMW PGA Championship this week at the historic Wentworth Club in Surrey, England. Adam Scott, Lucas Herbert, Min Woo Lee, Scott Hend, Jason Scrivener, Wade Ormsby, Maverick Antcliff are entered. Zach Murray has a membership extension and Jake McLeod will have a start via his Australasian Order of Merit status in 2021.