Jack Wilson is ready to defend his WA Goldfields PGA Championship title at the Kalgoorlie Golf Club from 30 October – 2 November.

“Kalgoorlie is a beautiful place, it’s very different to anywhere else on the schedule; it’s good to be back,” said Wilson, who made history as the first PGA Trainee to win a PGA Tour of Australasia tournament. 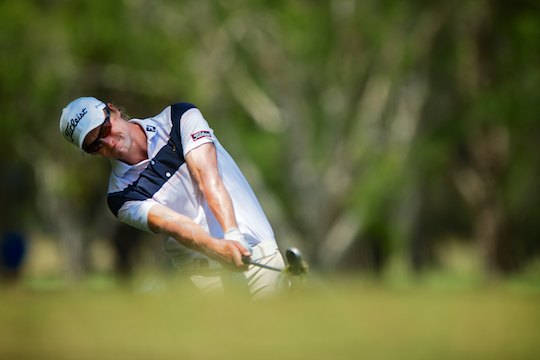 “Looking back, I wouldn’t have taken any other pathway to Professional golf. It’s because of the PGA Trainee Program that I was so prepared for Tour golf,” said Wilson.

“I had been playing professionally, for money in a competitive environment for three years before my WA PGA win.”

“I was lucky to be the first person to do it, but there are plenty of guys doing a Traineeship who can really play so hopefully there are many more to come after me.”

Winning the WA Goldfields PGA Championship provided a lot of opportunity for the 24-year-old; he earned full status on the PGA Tour of Australasia, finished third at the Australian PGA Championship behind Adam Scott and was fifth on the Order of Merit.

“It’s been a very interesting year; this win opened up so many doors and exemptions this year, not only in Australia but around the world.”

The world may have been opened up to Wilson but it’s been a steep learning curve, before this year he had never travelled outside of Australia.

“It’s very tough to understand how to handle yourself in other countries, how to keep my process and routine but also to roll with the punches because there are things that jump up that you can’t foresee coming,” said Wilson who in 2014 has compete on the Asian Tour, European Tour and European Challenge Tour.

“My team expected that it would be hard for me to achieve a lot this year, but me being big headed as I am I guess I didn’t take those things into consideration. I didn’t pay the travel enough respect.”

“I have done three long haul trips overseas now and with every trip I have gotten better and it’s all been good preparation for what is coming up.”

While he may have travelled the world over his attention this week is firmly on Kalgoorlie and retaining his WA Goldfields PGA Championship title.

“This is a new experience for me, at this stage I don’t feel like it has changed my preparations but there are definitely some nerves,” added Wilson.

“There is added pressure of having won the event before, so you have that anticipation that you will be able to do it again.”

“If I am somewhere in contention come the weekend that would be a fantastic result and if it happens to be down the stretch on Sunday that would be even better.”

The WA Goldfields PGA Championship will be played at Kalgoorlie Golf Club in Western Australia, from 30 October – 2 November and is proudly supported by the City of Kalgoorlie Boulder.

Being played for a prize purse of AU$110,000 the winner also receives Official World Golf Ranking Points and becomes fully exempt on to the PGA Tour of Australasia for the remainder of this season plus a further two years.