Peter Wilson has claimed his maiden PGA Tour of Australasia victory, with a two stroke win over Glenn Joyner in the WA Goldfields PGA Championship at Kalgoorlie Golf Course. 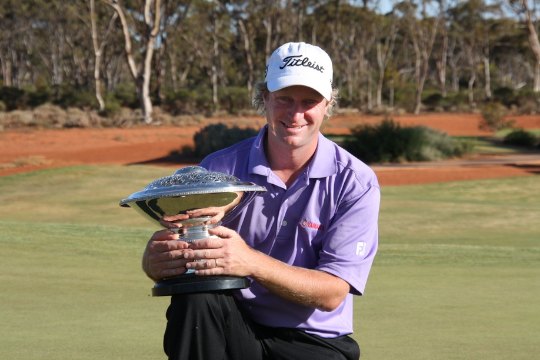 “It’s just so good to win one finally,” said Wilson after claiming $18,000, his biggest ever prize cheque in Australia.

Wilson has been a regular on the Australasia tour for over 10 years, finishing 51st on the money list in 2011 with $22,004 in earnings and during the 2010 Australian PGA Championship was joint leader after the second round.

The win in Western Australia is a much needed boost both to his bank balance and his confidence heading in to the Australian summer of golf.

Wilson’s game has noticeably improved in the last 12 months, which he credits to his new found focus as well as working with renowned experts Stuart Leong (PGA Coach) and Paul Trainor (physiotherapist.)

“It’s just the whole package, everyone is working together and it’s showing,” said Wilson.

“The last twelve months we have taken a different approach to my game, I am more focused and are limiting the mistakes. It is finally great to feel it all come together.”

Nick Cullen had another impressive tournament following his recent win in Asia, finishing at even par and in a tie for fourth with Kurt Carlson and Brendan Smith.

Rookie professionals Tarquin MacManus, Ryan McCarthy and Matt Stieger had solid finishes with MacManus securing a top-15 result, McCarthy finishing in a tie for 21st position and Stieger in a tie for 38th in his first event as a professional.

The PGA Tour of Australasia heads back to Perth for the ISPS HANDA Perth International to be played at Royal Perth Golf Club from 18-21 October.