Windred, who turned 24 a fortnight ago, carded back-to-back rounds of 69 over the weekend to finish on 12-under and a shot in front of defending Australasian PGA Tour Order of Merit winner, Brad Kennedy.

“I’m so pleased with not necessarily how I played, but how I got it done,” said Windred.

“It is one goal that I’ve had on my mirror for the last couple of years. I just haven’t been able to tick off the first professional win. I was trying to stay in the moment but it’s very hard not to think about such a big thing.”

“To have the opportunity to play in front of a crowd was great again, seeing everyone having a good time and soaking up the atmosphere was awesome.”

In terms of top-10 results, Windred didn’t exactly set the world alight in his first year on the Challenge Tour, however his consistency was impressive. 19 cuts from 20 tournaments shows that he has what it takes to play at the highest level and now with a win in the bag, his confidence is sure to be at an all-time high.

“In my career I want to be winning more of these trophies and just being in contention is the best feeling ever. It’s why I practise as hard as I do and make the sacrifices I do. It’s for that feeling of being in contention, under all the lights, and getting it done.” 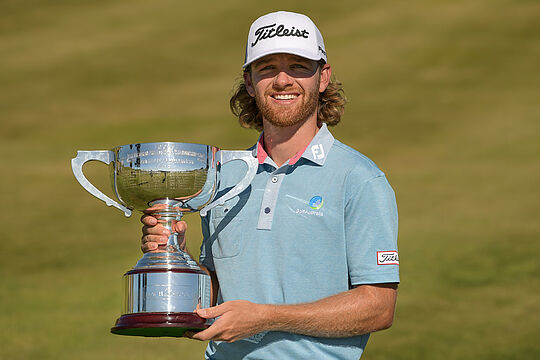 47-year-old Brad Kennedy also had something to prove this week after spending three months on the sidelines at home with his family following a gruelling overseas schedule fulfilling tournament invitations from his 2020 Order of Merit win, punctuated by a total of eight weeks in hotel quarantine.

Kennedy knocked off the rust with rounds of 70, 68, 69 and 70 showing that despite being twice the age of most of the field, his decades of experience on the Japan and Asian Tours count for something in the heat of the moment.

Cameron John and Cory Crawford rounded out the top-3, both shooting final rounds of 65 to share third place on 10-under.

Next up on the local calendar is the Gippsland Super 6, which tees off this Thursday at its new home at Warragul Country Club, 100km south-east of Melbourne, where Marcus Fraser will line up as defending champion.