It’s a rivalry that will one day surface in the pro ranks, for certain.

Until then young hotshot amateurs Blake Windred and David Micheluzzi are enjoying some epic battles as they try to emerge as winners whenever they compete. 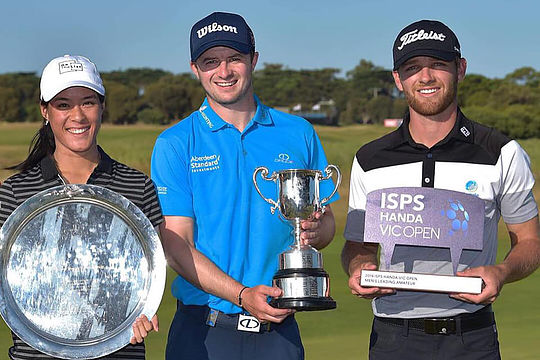 Their rivalry added another level of interest to the ISPS Handa Vic Open with New South Welshman Windred emerging victorious as leading amateur at the popular event.

Micheluzzi, currently the World No. 5, began the week with rounds of 67-68 and at one stage was inside the top 10 on the standings, before a disappointing 74-73 at the weekend.

“I love the atmosphere in professional golf, especially this tournament,” said Windred.

“This has definitely been my biggest professional event.To beat a few of the boys, it’s definitely a cherry on top!”

“It gives me a lot of confidence in the coming months and for when I do need to turn pro.”

In the women’s event, recent Australian Amateur champion Amy Hong continued her brilliant run to 2019, with the Korean taking out the women’s low amateur honours.

A Saturday 79 meant Hong didn’t take to the Beach Course in the final round but the low amateur crown was already secured following opening rounds of 68-72.

Hong finished at two over for the tournament, two strokes ahead of St Michael’s [Sydney] member Steph Kyriacou.