The Australian Golf Club’s Blake Windred has defended his Avondale Medal title by one stroke, closing with a 3-under 68 to erase a three shot deficit and edge out Queensland’s Jediah Morgan for the title.

Windred finished the tournament at 9-under-par and stormed home with an impressive back nine 33 after going out in 35 to record four birdies. Windred’s only blemish was a bogey at the par 4 6th. 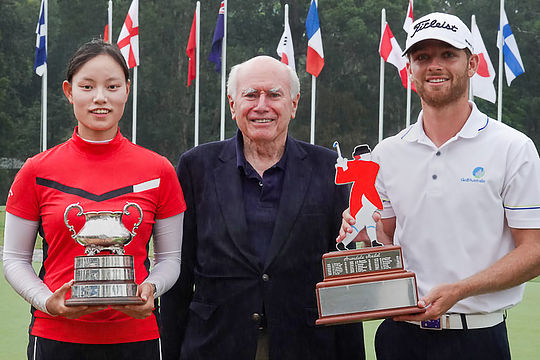 “Last year I hit it awful and scrapped it around to get the win, but this year, it was better,” said Windred. “I could’ve holed more putts this week, which is usually my strength, but I’m so happy with the way I hung in there.”

“I’m pretty speechless at the moment, but it’s a great win for me.”

Morgan was another fast finisher and fired the tournament’s second lowest round with a final day 66 to move six places up the leaderboard. Jordan Garner finished in outright third position at 7-under.

Third round leader Lewis Hoath, who had positioned himself well with opening rounds of 71-66-67, was not able to get his game going in the final round firing a 80 to fall thirteen places and record a tied 14th result.

Local player Jye Pickin held the opening two round lead ofter opening with consecutive rounds of 66, but finished with a pair of 74′s to record a commendable top-6 finish.

In the Women’s Avondale Bowl, 16 year old Korean Kumkang Park, known as “KK”, dominated the field to finish with a commanding eight-shot victory.

The overnight leader was never headed after holing out for eagle on the 1st hole and finished with a 2-under par 70, the low round of the day on a long and wet Avondale layout.

“I am so happy because it is my first win in a major tournament,” said KK.