Blake Windred has capped off his junior career in style by winning the 2015 JNJG Srixon International Junior Boys Championship at Cypress Lakes Resort in the Hunter Valley north of Newcastle.

Windred fired a stellar final round 70 to go with his previous rounds of 70, 64 and 69 for a 15-under-par total and a 13 shot victory ahead of his nearest opponents with Minwoo Lee and Fred Lee and Queenslander Lucas Higgins sharing runner-up position at 2-under-par. 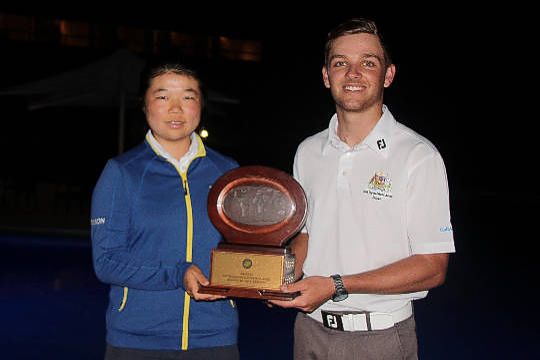 Windred, who is based at the Charleston Golf Club south of Newcastle, and the same club where Jake Higginbottom honed his game, set a course record during Wednesday’s round with a phenomenal 8-under 64.

“To finish with a big victory in a JNJG event was a major goal of mine,” said Windred, who with the victory gains an invite into Australia’s top world-rank amateur tournament, the Australian Master of the Amateurs, being played at The Royal Melbourne Golf Club in January next year.

“I’ve been playing JNJG events for more than 10 years and it’s been a great journey. Playing in these events teaches you how to win and if you get into a habit of getting the “W”, hopefully you can carry that on into the open ranks.”

Two shots further back were Cameron John from Victoria and Isaac Noh from The Australian who tied for fifth place.

In 2011, Windred created history after becoming the youngest player to qualify for the NSW Open as a 13 year-old. Records kept falling when he became the youngest person as a 15-year-old to win Waratah’s WE Alexander Open, a major amateur event in the Newcastle Region.

Windred’s promise caught the eye of the selectors from Golf Australia when in 2014 he was named part of the Australian team which finished fourth in the World Junior Championship in Japan. Against the world’s best juniors, Windred finished 26th with a 2-over-par.

“I’ve had a great time so far and I owe a lot to the Jack Newton Golf foundation. I leave the junior ranks prepared to focus on the national amateur events where hopefully I can get some results.”

Yuan fired the only sub-par total finishing at 6-under-par after firing rounds of 73-67-70-72. New Zealander Momoka Kobori came from two shots behind after round three to claim runner up over Western Australian Hira Naveed.

Kobori finished on a total of 3-over-par with Naveed a further shot back.