Winning father gets to name baby after Tiger Woods

It might have started out as a joke but there’s a baby boy soon to arrive in Dallas, Texas, who’ll be ‘paying’ for it for the rest of his life.

That’s because his father, Trey Little, was such an unabashed Tiger Woods fan that he not only backed the superstar to win the Masters…he also drew up a contract with his pregnant wife. 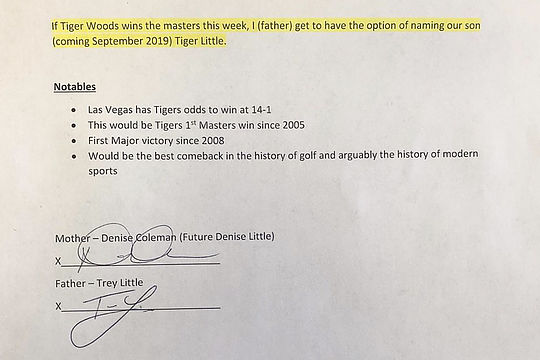 Basically, it stated that if Woods were to win the Masters – and he won his bet – that they would name their baby boy Tiger.

And Tiger did the rest.

The 15-time major champion scored a win for the ages.

The contract simply stated: “If Tiger Woods wins the Masters this week, I (father) get to have the option of naming our son (coming September 2019) Tiger Little.”

Denise agreed and signed the contract.

Little later told a New York newspaper about the reaction from his wife and himself when they realised that Woods was about to win the event.

“This whole thing started almost as a joke, then it turned into something really real, really quick.”

Little went on to explain that it wasn’t all bad as the child’s middle name was going to be Julian.

“He could always go by T.J.,” explained the ecstatic golf nut.