Dane Jeff Winther and his wife spent an anxious 45-mins locked in their hotel bathroom before managing to get to the course and capture a maiden Tour win at the inaugural Mallorca Open. 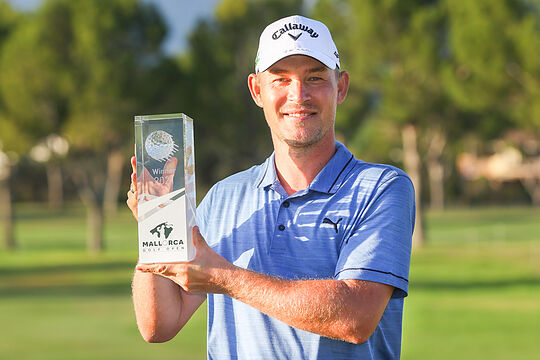 Fortunately time was on his side with hotel staff later breaking in to allow the couple to get dressed and get to the Santa Ponsa course ahead of his 12.30pm local time tee-off.

Winther eventually posted a closing round level par 70 to win by a shot at 15-under par ahead of being doused in champers by his Danish colleagues.

He said: “After breakfast I went to have a shower and my wife came in to use the bathroom, as well. The door closed, and there’s no lock, but we locked ourselves in.

“There’s no lock on the door, but the handle didn’t work. Our little girl Nora, six years old, had to go and find guys at reception to break down the door.

“We were in there for 45 minutes, I think. I thought, jeez not today, not Sunday, you’re leading the freaking event. Might not get there for your tee time. What a morning”.

Winther had posted first and third rounds of an equal Tour career low of 62 and after 22 birdies over all three days, he could manage just one birdie on day four and then missed a short putt at the last for bogey but it was good enough to win.

“It’s not sinking in. I couldn’t have a better week. I said at the start of the week that this was going to be like a holiday and apparently holidays work out for me,” said Winther.

Three players – the Spanish duo of Pep Angels (67) and Jorge Campillo (69) and Swede Sebastain Soderberg (68) – shared second place at 14-under. For Soderberg, it was his second runner-up finish in a row and turns around what can only be described as a very ordinary season to date.

Just two Aussies made the trip to the Balearic Islands located off the coast of Barcelona in the Mediterranean Sea. Scott Hend finished in a share of 20th place for his first cut since making the weekend at the Italian Open in early September.

Maverick Antcliff missed the cut to continue his mostly poor run of form this season since a runner-up finish at the Canary Islands Championship in May.

The Mallorca Open signals the end of the ‘Spanish Swing’ with the European Tour now moving north to Portugal for the Portugal Masters before heading to Dubai for the season-ending events – Dubai Championship and the DP World Tour Championship.