Wise holds day three lead at Master of the Amateurs

American Aaron Wise holds on to a slender one shot lead ahead of Englishman Jonathan Thomson after the third round of the Australian Master of the Amateurs at The Royal Melbourne Golf Club.

Wise fired a third round 4-under-par 68 after opening with rounds of 67-77 for a 4-under-par total leading into the final round.

Thomson, who stands at just over 2 metres tall and is a cancer survivor, crushed the par 5′s on Royal Melbourne’s West course on a day favourable for lower scoring. Going out in 2-under, the only blemish on the Englishman’s card was a double bogey at the par-4 11th.

Local member Thomas Power Horan fired a 1-under third round to be at 2-under-par along with fellow Aussie Andrew Schonewille who carded a third round 2-under-par.

Young gun Cameron John was the day’s mover with the 16-year-old and reigning Victorian Amateur champion carding a 3-under-par to sit just five strokes from the leader along with Blake Proverbs. 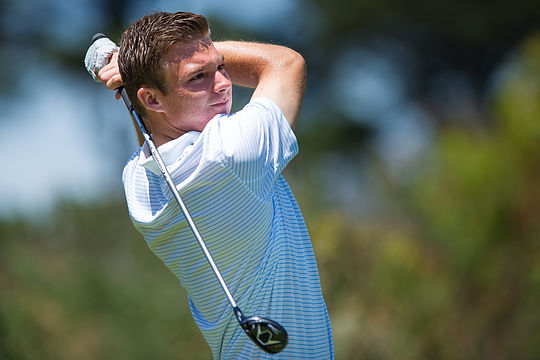 John has played the Royal Melbourne West course on a number of occasions with the Commonwealth Club pennant player capable of scoring low.

Overnight leader American Ben Schlottman was not able to retain his momentum, slipping back to a tie for 7th position after a round of 76.

Blake Proverbs is at 1-over along with John with Korean’s Sung-Ho Yun, Yong-Woong Kim and Nam-Hun Kim also sharing 7th position.

With the internationals currently holding a slender lead it will be up to Power Horan, Schonewille, Johns and Proverbs to fly the Aussie flag to retain the title won last year by Zach Murray.