Matt Wittenberg fired a third round 65 to win the City of Sydney International with a 2-under-par total after earlier rounds of 71-72.

In difficult conditions, Wittenberg, from the Avondale Golf Club located on Sydney’s upper North Shore, played stellar golf to record the day’s low round and a four stroke victory over Toby Williams from The Australian and Nick Watts from Concord. 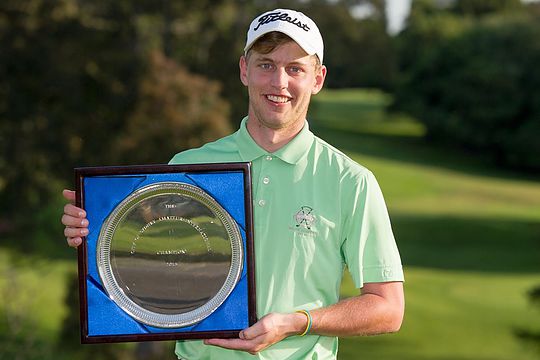 “I just kept focussed out there as the conditions got harder and hotter and it worked,” said Wittenberg, whose next event is next week’s Keperra Bowl in Queensland.

“A win like this sets up well for the coming Australian Ranking events. It’s the confidence booster that I was after. My best round is a 62, so to card a 65 out there today given how difficult the course was playing is great.”

Wittenberg was the only player in the field to break par for the tournament as the Moore Park layout proved a stern test of golf with hot westerly winds seeing players negotiating cross-winds on a number of tricky holes.

“It was certainly tough out there,” said Wittenberg, who’s off a +3 handicap.

“That’s reflected in the scoring. The scores were not as low as they have been in the past.”

Dale Williamson from Killara finished in 4th position with a 2-over-par total, a stroke behind Watts and Williams. Dale Brandt-Richards and Dylan Perry were at 4-over and in a tie for 5th position.

In the Women’s City of Sydney International, Chizuru Ueda from The Lakes Golf Club secured a comfortable five stroke win over June Song, Lucie Quilliam and Celina Yuan after rounds of 71-76.