Jared Wolfe fired rounds of 63-65-65-71 to win the Wichita Open on the Korn Ferry Tour by a shot over Canadian Taylor Pendrith on Sunday.

The victory sees Wolfe with two wins this season on the Korn Ferry tour, he also won the Bahamas Great Abaco Classic at Baha Mar in January, and a third win would give him an instant promotion to the PGA Tour. 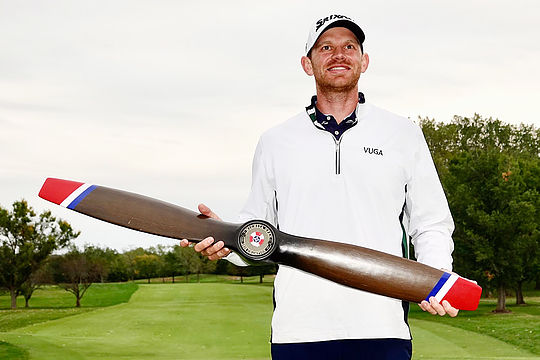 “It’s crazy,” Wolfe said of being close to the PGA Tour. “It kind of puts things at peace for me a little bit about having to wait another year for the PGA Tour but maybe not. It’s huge. I feel like I’ve been playing great all year.”

Wolfe, who began the final round with a three-stroke lead, started with a bogey on the par-4 first dropping his lead to one.

Despite the setback, he settled into his round carding five consecutive pars from the 2nd through to the 6th to maintain the lead. As he played the par-4 seventh, the weather rolled in with rain and heavy winds delaying play for an hour and 18 minutes.

Upon returning to the course the conditions had deteriorated with players battling winds yet Wolfe remained consistent with a string of pars to keep his lead. On the 18th Wolfe executed a nice up-and-down to gain the victory.

“I’m going to go home and celebrate with my daughter and my wife,” Wolfe said. “My parents are in town too so; I get to hang out with them for a day. Then, it’s off to Savannah and we’ll try to go get (win) number three.”

Australia’s Harrison Endycott recorded his best finish on the Korn Ferry Tour carding a 12-under-par total for a share of 8th position. Endycott’s best finish before Sunday’s result was a tied 24th in Mexico.

During the 2020 season Endycott has played 15 events and made the cut in 11 to bank two top-25 results in addition to his top-10 on Sunday.

Endycott was the only Aussie to make the weekend with Mark Hensby narrowly missing the 3-under par cut mark by a stroke, and Austin Bautista in his first tournament on the Korn Ferry Tour carding rounds of 68-73, Jamie Arnold 68-73 to finish at 1-under. Ryan Ruffels finished at 4-over with rounds 73-71.

The 2016 New South Wales Amateur champion, who now resides in Altadena, California, has spent time on the PGA Tour Australasia as well as the Outlaw Tour in the US.

Two events remain in the 2020 portion of the Korn Ferry Tour’s 2020-21 combined season with the southeast swing starting this week with the Savannah Golf Championship followed by the Orange County National in Orlando, Florida.

American Will Zalatoris is ahead of the rankings with Aussie Brett Drewitt 19th and inside the desired top-25. Curtis Luck currently sits 27th followed by Ryan Ruffels at 54th.