Jeneath Wong and Andrew Richards have taken out the Riversdale Cup with Wong securing a solid 12 stroke victory and Richards finishing in style for a two stroke win at Riversdale Golf Club in Melbourne.

Wong, from the Melbourne’s Metropolitan Golf Club, was in total control throughout the tournament and ran away from the rest of the field with a final round 69 to finish at 6-under the card to record back-to-back titles at Riversdale after winning last year. 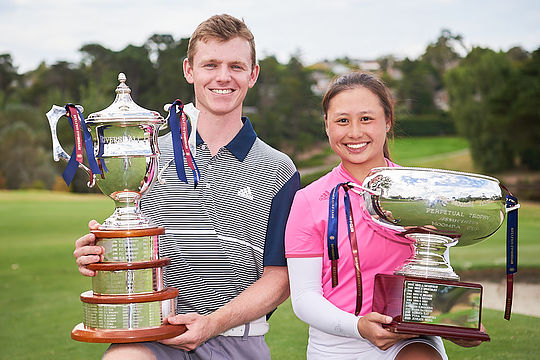 “With tournaments starting to stack up, it’s great to get a win and my game is getting better. I’m really honoured to be able to win this event two times in a row. It’s great.”

In the men’s championship it was a closer affair.

Richards, who recently won the NSW Amateur Championship, had to stave off challenges from last year’s winner Lawrence Curtis and the fast finishing Aiden Didone, with Didone storming home thanks to a closing round 66.

Richards finished at 12-under-par finishing with an impressive birdie on the last after driving the green for a three stroke win over Curtis. Didone finished in a share of third position with US Mid-Amateur champion Lukas Michel.

“I didn’t quite have it on the front nine, but I was still solid on the way in making an up-and down on the 17th and then making birdie on the last to win, I very proud of myself,” said Richards, who plays out of Pennant Hills Golf Club in Sydney.

“The win tells me the work that I’ve done with my coach Rachel Bailey is starting to pay off. I love this event and I love coming down here and it’s a really cool feeling to win an event as prestigious as this.”

Michel, a winner earlier this year at the Australian Master of the Amateurs, was unlucky in the opening holes with birdie putts edging the hole as he attempted to make up the overnight two stroke margin on Richards.

A mistake after overhitting the green on the 4th halted Michel’s momentum, whilst Richards was able to string together some pars to make the turn even for the day before making two birdies on the back nine to finish with a final round 2-under-par 70 for the win.

This was the 112th staging of the Riversdale Cup making it one of the oldest amateur tournaments in the world. Richard’s name will now be etched alongside past champions including Aaron Baddeley, Ryan Ruffels, Lester Peterson, Jake Higginbottom, Brady Watt, Brendan Jones, Stephen Dartnall and Nathan Holman to name a few.