Wood came from three shots back and while he eagled the fourth, the Bristol-born player bogeyed three of his closing five holes in a round of 69 to win by a shot with a nine-under par total. 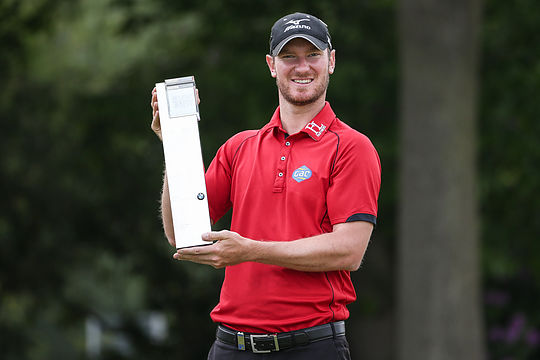 Sweden’s Rikard Karlberg, who had beaten double Major winning Martin Kaymer in a play-off to capture last year’s Italian Open, was second shooting a 65, and a shot clear of Masters champion, Danny Willett (71) who was third at seven under par.

Overnight leader Aussie Scott Hend, who threatened to punch a couple of drunken yobs during Saturday’s third day, crashed off the ‘Burma Road’ course shooting a six-over par 78 for a three under par tally and a tie for 15th.

Crane, 28 had previously caddied for fellow Scot Richie Ramsay joined Wood in firstly celebrating a three-year exemption into The Open, a third Tour victory and a whopping £637,341 first prize cheque that Crane is assured 10%.

The pair first hooked-up two years ago at the Spanish Open with ‘Punk’ helping steer Wood to a share of seventh.

Wood said: “Punk and I have just got on so well. I’ve had about three or four caddies since I came out on Tour and while they have been fantastic but they have been a little bit older than me.

“But Punk’s only a few years older than me and I can genuinely say we are good friends. He’s very, very calm as you saw there at the last when he made me lay-up with a sand-wedge.

“He’s learning out here like I am and came out on Tour about the same time as I did but there is a good group of caddies in about the same age bracket and Punk is certainly one of them.”

And Crane, who unlike Wood was aware of the situation at the last, was just as delighted as Wood: “Chris didn’t know what the situation was and was thinking of going for the green with his second but I told him to lay up with a sand wedge, then hit another sand wedge on to the green.

“I have to admit I was nervous. My mouth was dry. For me, personally, this is my biggest win as a caddy. It wasn’t pretty on the back nine, but Chris thoroughly deserves it.”

“It has come at the point in his career that gets him up to the position he wants to be in.”

Nathan Holman was the next best of the Aussies in 37th place at 1-over with Richard Green another shot back in a tie for 43rd. Andrew Dodt (T47) was the only other Australian to make it to the weekend.