Gary Woodland posted an opening-round 64 and leads the PGA Championship by one shot over Rickie Fowler, who held the clubhouse lead for most of the day with a 5-under 65, and by two over Zach Johnson and Brandon Stone (66).

Eleven players sit in a tie for 5th place on 3-under 67 including 2015 PGA Champion Jason Day, Dustin Johnson, Justin Rose and Ian Poulter and are amongst 46 players under par at Bellerive Country Club today.

Woodland made the turn at 1-under following two birdies and an opening bogey but quickly gained momentum at the 11th hole where he kicked off an incredible seven-hole, five-birdie stretch to leapfrog Rickie Fowler at the top of the leaderboard.

The American just missed a 6-metre birdie chance on the 18th hole that would have equalled the lowest round in PGA Championship history. 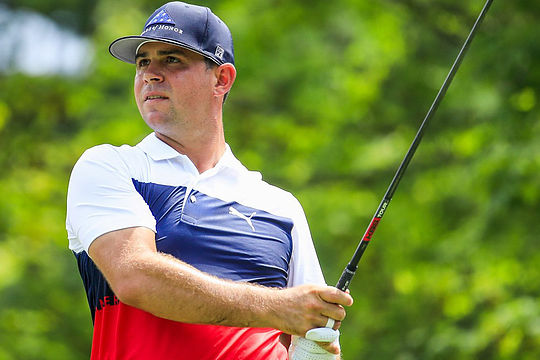 14-time major champion Tiger Woods began his campaign with a bogey-double bogey on his first two holes but managed to card an even-par round of 70 to finish in a tie for 48th.

“I just hung in there. I was trying to grind away at it, pick away at it, and trying to get to maybe 1 over par at the turn and ended up being 2 where it was. I was able to grind out a score today,” said Woods.

“I could have easily gone the other way, being 3 over through two. A lot of things could happen. Not a lot of them were positive, but I hung in there and turned it around. Just happy to be within five right now.”

Jason Day leads the Aussie pack in equal 5th place at 3-under 67 bringing with him some of the top form he had on display at last week’s Bridgestone Invitational.

“I definitely gave myself a fair share of birdie opportunities out there but didn’t quite capitalise on the front side,” said Day.

“Overall, I’m very happy with how things progressed out there.”

Day sits one stroke ahead of Marc Leishman (68) with Adam Scott (70), Craig Hocknull (72) and Cameron Smith (74) rounding out the rest of the Australian attack.