The 33-year-old world number 53 was three off the lead going into the final round before firing nine birdies to card a 7 under 64 to finish 18 under along with fellow American Chez Reavie.

Woodland’s par on the first play-off hole – the 18th at TPC Scottsdale- was good enough to defeat Reavie, who holed a 13 metre for birdie on the 72nd hole to get into the play-off.

It was the third victory of Woodland’s PGA Tour career, but it had been nearly five years since his first at the 2013 Reno-Tahoe Open. Despite his absence from the winner’s circle recently, Woodland has been putting himself well in contention with seven runner-up finishes in that time.

“I’ve played well over the last five years, I think I had six second-place finishes,” said Woodland. “I just haven’t put four rounds together. That was the struggle last year.”

“I put a lot of work in this off-season. I knew what’s been going on the last couple years, short game needed some adjustment. I still got to get more comfortable with the little things that I’m working on, but I’m excited about where we’re at.” 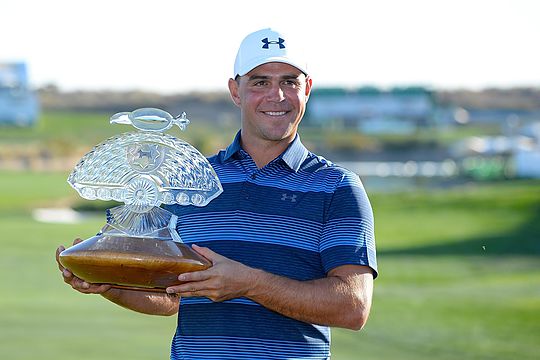 “I feel like I can make a lot of putts and I haven’t felt that way in a long time,” said Woodland. “And obviously with the way I hit it and now I’m confident with the short game, and the putter starts working, good things will happen.”

Woodland also won in 2011 at Innisbrook and hasn’t missed a cut in four fall starts this season and started the new year well with a T7 at the Sony Open and a T12 at last week’s Farmers Insurance Open. He moves to 5th on the FedExCup Rankings.

Ollie Schniederjans and Brendan Steele tied for third at 15 under, with Chesson Hadley, Matt Kuchar and Bryson DeChambeau and Phil Mickelson at 14 under.

Mickelson was well in contention with three consecutive birdies on his back nine holes however a disappointing double-bogey at the final hole marred an otherwise impressive return to form.

Seeking his fifth win in his 200th PGA Tour start, third round leader Rickie Fowler bogeyed three of the last four holes for a 2-over 73 to eventually finish in a tie for 11th position.