World number one Tiger Woods and red-hot favourite this week has openly admitted at his US PGA press conference that capturing a 15th Major Championship is now proving a tougher task than winning a 14 prior Majors.

It’s been more than five years since Woods defeated fellow American Rocco Mediate to capture the 2008 US Open at Torrey Pines in California.

Of course, Woods captured his first Major in 1997 winning a first Masters by a remarkable 12 shots. 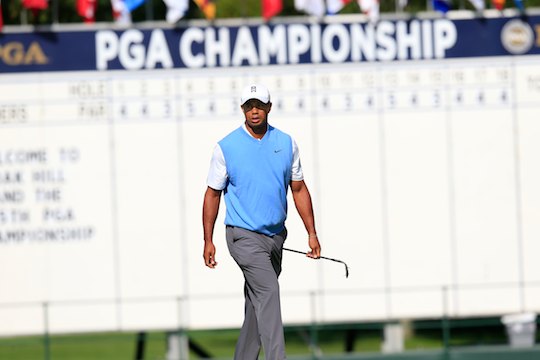 A full house at Oak Hill on Tuesday watched Tiger Woods in action ahead of the 95th PGA Championship (Credit: Eoin Clarke/www.golffile.ie)

“It kind of seems that winning a 15th Major is the toughest one to win,” he said.

“It’s been probably the longest spell that I’ve had since I hadn’t won a major championship. I came out here very early and got my first one back in ’97.”

“I’ve had, certainly, my share of chances to win. I’ve had my opportunities there on the back nine on probably half of those Sundays for the last five years where I’ve had a chance, and just haven’t won it.”

“But the key is to keep giving myself chances, and eventually I’ll start getting them.”