Brace yourselves golf fans – Tiger-mania is on its way to Australia – again. World No.1 Tiger Woods will return to Melbourne in November to defend the JBWere Australian Masters.

In what is another major coup for Australian golf, the troubled superstar’s self-confessed love for sandbelt golf and defending titles proved too much to resist. 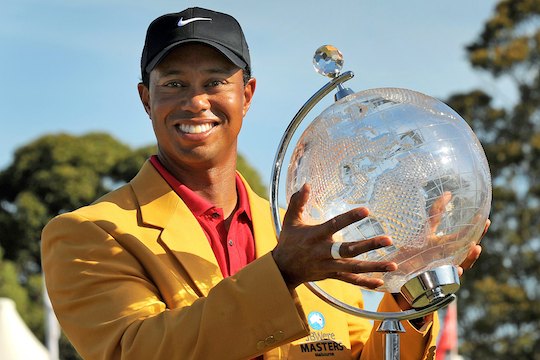 Woods back for Australian Masters defence

His decision is set to see the fairways of Victoria Golf Club jam-packed with golf fans in what is tipped to be another sold out Masters, replicating last year’s groundbreaking success at Kingston Heath where record crowds and TV ratings put golf on the front pages of papers across the nation.

Asked about his upcoming trip to Australia, Woods said: “I am pleased to be able to return to Melbourne to defend the JBWere Masters. The Australian galleries made last year’s event a great experience for all the players and I look forward to playing at The Victoria Golf Club in November.”

However, win or lose, the world’s richest athlete will be hoping for a better outcome on his return home this year.

Woods’ world came crashing down around him immediately after his victorious visit to Melbourne last year, where it was revealed he had been having extra-marital affairs.

Woods eventually admitted to his infidelities and following a brief hiatus from the game to work on saving his marriage and seek rehabilitation, he has embarked on a much-publicised comeback to Tour golf.

The 2010 JBWere Masters will see one of the greatest fields ever assembled for a tournament in Australia with the defending champion joining international stars Sergio Garcia (Spain) and Camilo Villegas (Colombia) along with the 2006 US Open Champion, Geoff Ogilvy.

Tiger’s return Down Under reinforces Victoria’s proud history of staging major sporting events which earlier this year saw Melbourne awarded the Ultimate Sports City for the third year in a row.

Last year’s JBWere Masters set a new benchmark for Australian golf with record crowds and television audiences and delivered in excess of $34 million to the Victorian economy.

The 2010 JBWere Masters will again be broadcast on Channel Nine and FOX SPORTS and will be played at The Victoria Golf Club from November 11-14.