(Carnoustie, Scotland:) Tiger Woods admits contending at the Open felt just like the old days and was delighted his two children finally got to see what all the fuss was about.

Woods held the outright lead at Carnoustie heading into his back nine, as he looked to end his decade-long major drought, but dropped three shots in two holes and never regained the momentum. 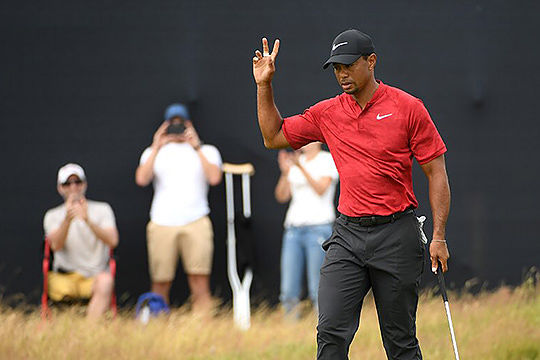 However there was a nice consolation prize for Woods after his disappointing back nine at Carnoustie.

The 42-year-old needed a birdie at the final hole to secure a spot inside the world’s top 50 and guarantee him a start in next month’s WGC-Bridgestone Invitational – a tournament he has won eight times. He missed the putt but he wasn’t the only one.

Soon afterwards, Jordan Spieth also missed his attempt from a similar distance which meant that Woods finished in a three-way tie for 6th rather than a four-way tie and claimed enough points to move him inside the all-important number 50.

This wasn’t the only special moment for Woods. Swept along by a massive gallery cheering his every move, this week’s result was the clearest indication yet since returning from a fourth back operation that Woods can compete at the highest level again.

Daughter Sam, aged 11, and son Charlie, nine, were too young to see their dad in his prime but they greeted him with a hug behind the 18th green.

“I told them I tried, and I said ‘hopefully you’re proud of your pops for trying as hard as I did’,” he said.

“It’s pretty emotional because they gave me some pretty significant hugs and squeezes there.”

“I know that they know how much this championship means to me and how much it feels good to be back playing again.”

“To me, it’s just so special to have them aware because I’ve won a lot of golf tournaments in my career, but they don’t remember any of them.”

“The only thing they’ve seen is my struggles and the pain I was going through. Now they just want to go play soccer with me so that’s just such a great feeling.”