Tiger Woods is the first to admit he does not enjoy the best of Ryder Cup records but after ending a more than 5-year victory drought last Sunday in Atlanta for his first victory in five years, he is eager to do his part this week in helping the Team USA also end a 25-year losing streak on European soil.

But after his stunning success in capturing a third Tour Championship title, Woods could not be in better form coming into what will be an eighth Ryder Cup appearance and his first in six-years. 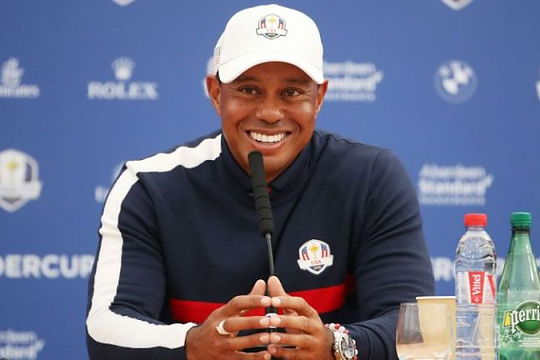 “My record certainly is something that — looking back on my entire Ryder Cup career, that’s not something that I have really enjoyed and I’ve really liked seeing,” he said.

“I played a lot of the matches. Of those seven previous Ryder Cups, I’ve sat out one session, and that was the last session at Medinah. Otherwise, I’ve played every single match.”

“We haven’t done well. You know, the year that we won in 2008, I had reconstruction knee surgery after the U.S. Open and I didn’t play. And I was a vice captain in 2016, but it’s different being a player.”

“It was neat to be part of the team, to be a part of helping the guys in any way I possibly could to make them feel comfortable, to get them into the right circumstances to allow them to play their best golf.”

“You know, as a player, it’s different because you focus — as a player, you focus on your playing partner you’re playing with and earning your point.”

“As a vice captain, there’s so many moving parts that you’re in charge of, and so that was very different in 2016, but my overall Ryder Cup record, not having won as a player since 1999 is something that hopefully we can change.”

“We haven’t won as a U.S. squad here in 25 years on foreign soil, so hopefully that will change this week, as well.”

Woods spoke also of the excitement that already surrounds this week.

“It’s going to be fun,” he said Woods. “It’s an awesome environment.”

“It’s something we don’t get to experience often because basically it’s [like] the final round of a tournament on the very first hole and every match you tee it up. It’s a different atmosphere and one that we absolutely love.”