“Phase 1 of irons development with TaylorMadeGolf is complete,” said Woods in a tweet. “Looking forward to teeing it up this week!” 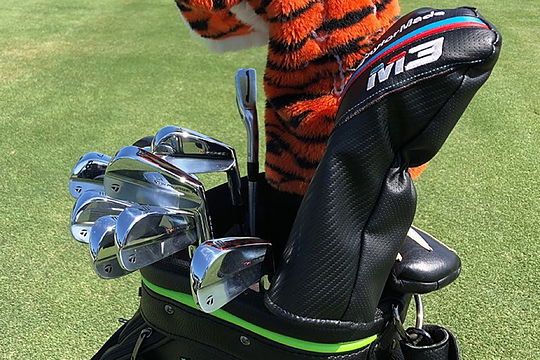 Tiger Woods posted a photo of his new irons on Twitter

Just as he had done for so many years with Nike, Woods has been working with TaylorMade on the development, creation and refinement of a set of TaylorMade irons that meet his precise standards and preferences.

Phase 1 marks Tiger’s initial transition into a full set of TaylorMade irons with the words ‘TW Phase1’ stamped on the rear of the clubface.

Woods will put the irons into play this week at the Wells Fargo Championship in his first start since the Masters.

After Nike pulled the plug on their golf quipment business at the end of 2016, Woods signed a deal with TaylorMade in January 2017 and has used the company’s drivers and fairway woods since December 2016.

“We have been working closely with Tiger on the development, creation and refinement of a set of TaylorMade irons that meet his precise standards and preferences,” said a TaylorMade representative to Golfweek magazine.

“This set was built to his meticulous specifications. Based on the positive feedback and excitement expressed by Tiger regarding upcoming prototypes, we are encouraged by the ongoing creation process and look forward to what’s in store for the next phase of Tiger’s irons.”

“As we work toward finalising Tiger’s new irons, there will be more information to come, including a release date.”

And Wells Fargo officials have grouped Woods over the opening two rounds of the $7.2m event with new Masters champion, Patrick Reed and reigning US Open winner, Brooks Koepka.